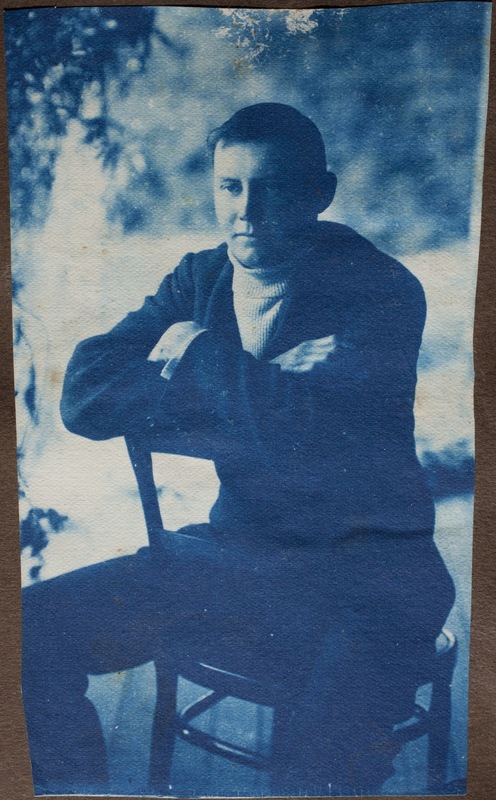 Douglas Day as a young man

‘Surely it is apparent that men with good reputations suffer keenly to be numbered with criminals, and were it not that our blessed Lord Jesus was numbered with the transgressors primarily to make atonement for sins and secondarily suffering for righteousness’ sake, we could not bear it. But he says, “Blessed are they that suffer for righteousness' sake,” and we are still fully convinced that we are amongst that number.’[1]

Douglas Day was living in community at the Richmond Mission, a fundamentalist Christian sect and working as a self-employed farm labourer when he was called up for military service in 1917.

His medical examination in August 1917 classed him as C2 which meant he was ‘permanently unfit for active service but fit for service within New Zealand’.[2] At a hearing of the second Canterbury Military Service Board in June 1918, Day was asked whether he would do ambulance work, and was reported to have replied with an uncompromising ‘No!’ [3]

Douglas Day was a shy and retiring man young man of 32, who never sought the lime-light. But this newspaper report compelled him to write to the Sun newspaper to correct the misleading impression that had been given. He had, he said, answered ‘No Sir’ respectfully, and had not elaborated any further because a complete statement explaining the reasons for Mission members’ refusal to do ambulance work from a Scriptural standpoint had already been given numerous times. The editorial reply published alongside his letter shows the hostile attitude of the times towards conscientious objectors:

If our correspondent chooses to throw in his lot with a sect which interprets Scripture in such a way as to absolve him from the duty of striking a blow for freedom and civilisation, he deserves no sympathy whatever. Brave and gallant fellows are giving their lives by the thousand to protect snuffling “conscientious objectors” from the fate of the inhabitants of northern France and Belgium, and any man who would rather be enslaved by the Huns than lift his little finger in resistance to them is unfit to be a citizen of a free country.[4]

Douglas Day's appeal was dismissed, as was that of John Stubberfield, a cycle-maker and member of the Richmond Mission who appeared on the same day. Stubberfield stated during the hearing that five members of the Richmond Mission were already in goal. The magistrate’s response was, ‘that he had no doubt they richly deserved it, for allowing others to work and fight for them’.[5]

After Day failed to proceed to camp when ordered to do so on 1 July 1918, a warrant for his arrest was issued, and he was court martialled at Featherston Military Camp on 26 July 1918. His sentence was for one year and 11 months of hard labour for ‘disobeying a lawful command given by his superior officer’.[6]

Letters that Douglas Day wrote to his family while he was in prison show that his religious belief was an important consolation to him and he always presented a determinedly cheerful point of view. A letter he wrote from Featherston while he was waiting to be court-martialled said the military people were being very good to him; he had been put in a hut with a coke fire under a promise that he would not break camp, and was allowed to go anywhere within bounds.[7]  A later letter, probably also written at Featherston, said he had another young fellow from Woodville in the same hut, who held the same opinions, so they could talk to each other and read without interruption.[8]

Later Douglas Day spent time in The Terrace Jail in Wellington, and then in Lyttelton Gaol where he waited for a place to come available at Paparua. He was allowed to write just one letter a week, and if he had a visitor, then he lost the privilege of writing the letter. It was also difficult not knowing where or when he might be sent somewhere else. In a letter to his mother, Douglas Day wrote:

You see I am still on my way to Paparua, but as this is my third week I hardly think it can last much longer, but of course one never knows in these institutions what a day may bring forth. I have not been well for a week or so. Had an attack of influenza and it left me with a slight turn of dysentery, but feel pretty well today so you need have no worries. Otherwise I am well altho I miss the fellowship of the others who were with me in the “Terrace”. Here I am alone so far as Christian fellowship is concerned but “He abideth faithful and in Him I have perfect peace”.[9]

At Paparua he was pleased to find himself once more amongst his friends from the Richmond Mission and other men he knew. Paparua was nicer than a town jail and he was ‘perfectly satisfied and content’ though they received less news of the war than in the other jails.[10] 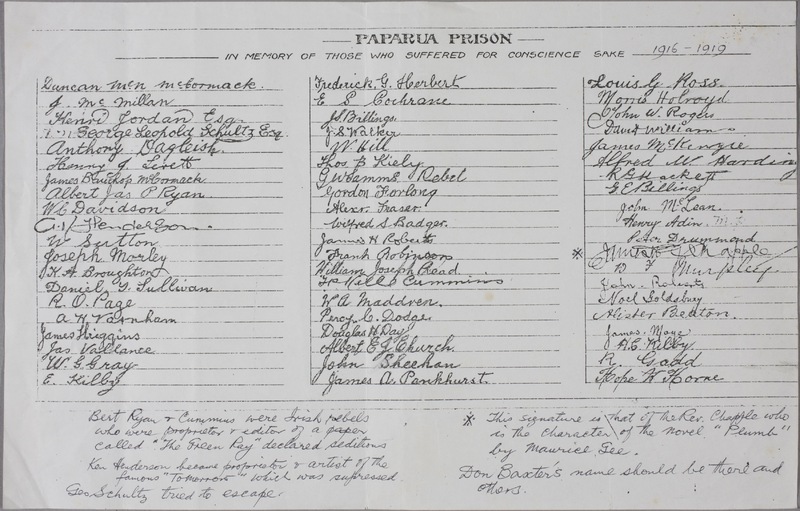 Signatures of the men incarcerated in Paparua. Douglas Day's is in the middle column, fourth from the bottom

By December a number of the CO's were ill with influenza and Day helped to nurse them. Consequently he had more liberty though he was not allowed visitors because of the epidemic. It was also difficult for his family who did not own a car to get to Paparua. They had to try and get a seat in a car with some other visitor.[11]

At Christmas 1918 Douglas Day was delighted to receive letters and sweet peas from his family [12] and a food box which Sarah Page had organised, one for each of the 60 conscientious objectors. Each box contained two pieces of cream sponge, sundry pieces of fruit cake, shortbread and mince pies, two apples, a few cherries, a small bag of sweets, muscatels and a piece of chocolate.

‘I can truly say’, wrote Douglas Day to his mother, ‘that the last six months [have] been at times the best I have known. There have been times of acute spiritual suffering (which is the keenest one can know) but there have been abundant compensations’. He went on to quote John Bunyan:

I am in prison now,

in body, but my mind,

Is free to study Christ and know

Unto me He is kind.

For though men keep me outward man

Within their locks and Bars,

yet by the faith of Christ I can

Mount higher than the stars.[13]

Founded in 1911 by Florence Smith and her husband David, the Richmond Mission was known for its evangelical and charitable work. A fundamentalist sect, its members believed the Bible to be literally true. At its peak the Mission had 250-300 members. Several members of the Mission served prison sentences during the war and in July 1917 David Smith on behalf of the Richmond Mission asked the Military Board to re-hear the appeals of two members, arguing that the Mission was a religious body within the meaning of the act. The re-hearing was refused.[14]

Douglas Day was released from Paparua Prison in August 1919 and continued to live a quiet life in community with the Richmond Mission.