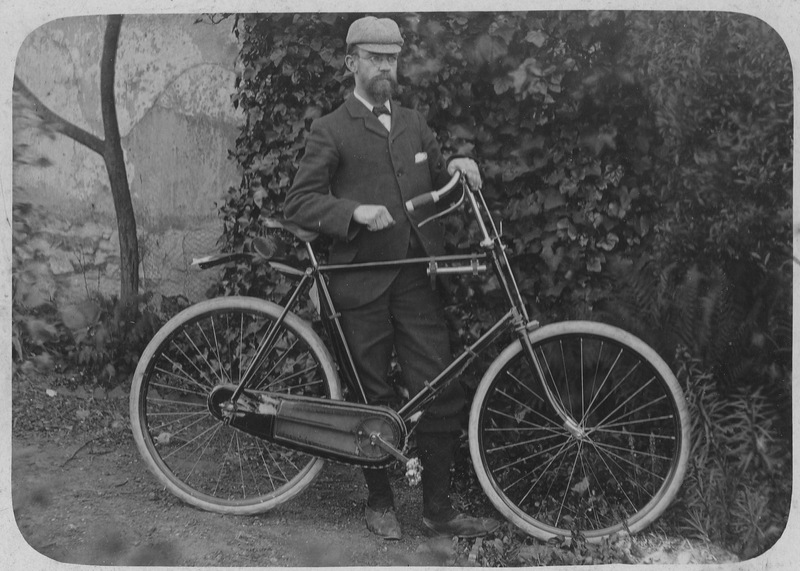 ‘We believe that the forcing of conscience by whatsoever authority is contrary to Divine revelation and amounts to persecution of the grossest kind’.[1]

This statement was included in a resolution that Charles Mackie put forward in 1917 to be sent to the Prime Minister. Twelve people supported the resolution, thirteen were against.[2] As a Baptist lay preacher Charles Mackie was one of a group of pacifists whose beliefs about the issue of conscientious objection split his church's congregation and, according to a later report, threatened its existence.[3]

Charles Robert Norrie Mackie was born in Christchurch in 1869 but probably spent most of his childhood at the sheep station ‘Lavington’ on the south bank of the Rakaia River originally bought by his grandfather but later divided between his father and uncle. In 1884 when Charles Mackie was about fifteen his father sold his share in the land and returned to England, taking his family with him, including Charles. Charles Mackie’s father died the following year.[4] Charles stayed on in England until after his mother’s death in Devonshire in 1900, and it seems that the proceeds of his family’s land sales supported him for the rest of his life. [5] 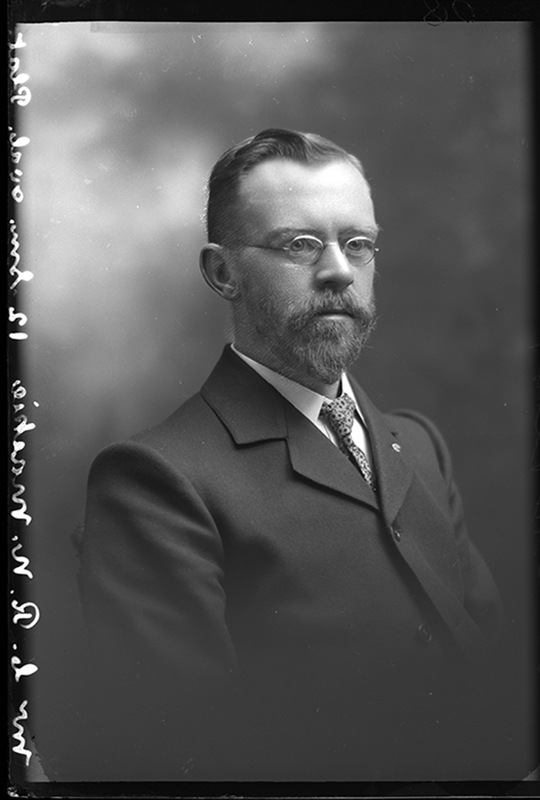 A portrait of Mackie taken in about 1907.

After returning to live in New Zealand Charles Mackie devoted his life to voluntary work. His interests included the New Zealand Society for the Protection of Women and Children, the New Zealand Howard League for Penal Reform, and the Canterbury Workers' Educational Association but it was to the peace movement that he made his greatest contribution. A founding member of the National Peace Council in 1911, Charles Mackie became Secretary in 1912 and remained in this position for more than 30 years.[6]

He married Ethel Maude Manttan, nee Nuttall, in 1914 but the couple did not have any children.[7] Their home, which they called 'Lavington', was on Rolleston Street in Linwood (later renamed England Street).

Charles Mackie's first become interested in the peace movement during the seventeen years that he spent in England as a young man, later reporting that he was among those who had fought ‘strenuously for a peaceful settlement’, at the time of the South African war.[8] It seems likely that on his return to New Zealand Mackie was attracted to the Baptist Church by the ministry of the Rev Joseph Doke, who had spoken out against New Zealand’s involvement in the South African War.[9]

By 1902 Mackie was playing an active role in the Oxford Terrace Baptist Church in Christchurch. Over the next few years he held positions of responsibility in the church at local, regional and national level. For three years he was the Missionary-Organiser for the New Zealand Baptist Union, a role he discharged with ‘skill and thoroughness’.[10] He regularly attended the annual meetings of the New Zealand Baptist Union and represented Christchurch on its Executive committee. In October 1909 he left New Zealand for a year long trip to India, the United States and the United Kingdom attending an international Christian conference in each country. On his return to Christchurch in 1910 Mackie became even more prominent in the church, taking services as a lay-preacher and speaking on numerous occasions about the Baptist missionary effort. The three great conferences he had attended left a big impression. At each of them, he said, there was a ‘deep response given to any reference to peace’.[11] 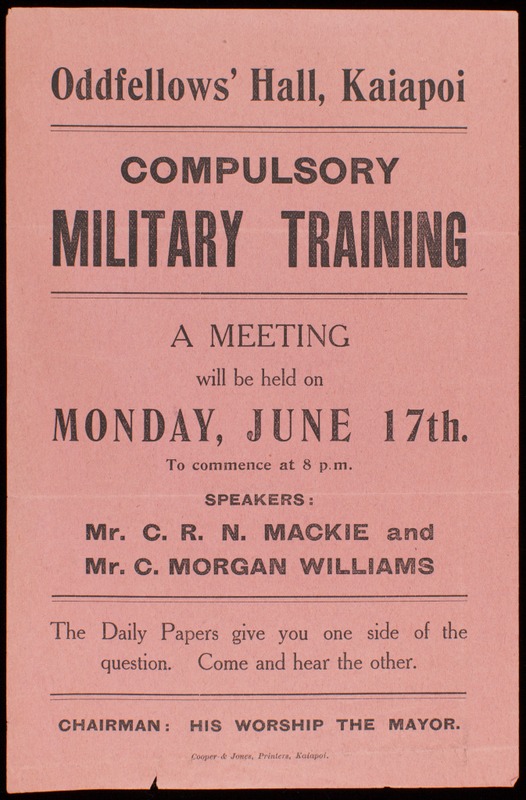 In 1909 when the New Zealand Government decided to gift a ‘dreadnought’ battleship to Britain, Mackie responded with a letter to the New Zealand Baptist magazine. Jesus Christ’s teachings on the peace question were very clear, he said: Christ’s message was peace on earth and goodwill towards all. Arbitration needed to be adopted for settling international disputes and Christians should be sending messages of peace and goodwill to fellow Christians throughout the world. His conclusion was that ‘Instead of War Leagues, form Peace Unions; instead of shouting for more “Dreadnoughts” raise our voice for Peace’.[12]

Two years later he was further stimulated into action by the Defence Department sending a letter to every Ministers' Association in New Zealand asking churches to provide lists of names of boys eligible for military training. When this letter was read in the Oxford Terrace Baptist Church a member protested, and this led to a meeting of the Baptist Lay Preachers' Association passing a resolution which called upon people to 'passively resist' the Government.[13]

Following a larger meeting on 26 May, Charles Mackie and Louis Christie convened a meeting of sympathisers in the YMCA Buildings on 21 June where The National Peace and Anti-Militarist Council was formed.[14]

In November 1911 Mackie was among 25 delegates from Anti-Militarist Leagues and other supportive organisations who attended a national conference in Wellington which planned a campaign against the compulsory clauses of the Defence Act and confirmed Christchurch’s leadership of the peace movement at this time.[15] Charles Mackie, was appointed unpaid national organiser of the peace council in February 1912,[16] and from about this time the National Peace Council (NPC) and Anti-Militarist League (AML) began to function in Christchurch as two separate organisations each with a distinct focus. While both organisations shared the aim of working for the repeal of the compulsory clauses of the Defence Act the Anti-Militarist League was a local membership organisation which promoted the principles of peace by distributing educational literature.[17] The National Peace Council of New Zealand on the other hand was a council of delegates and elected members, which worked towards the settlement of international disputes by the substitution of arbitration for war, while also playing a national co-ordinating and educational role.[18] 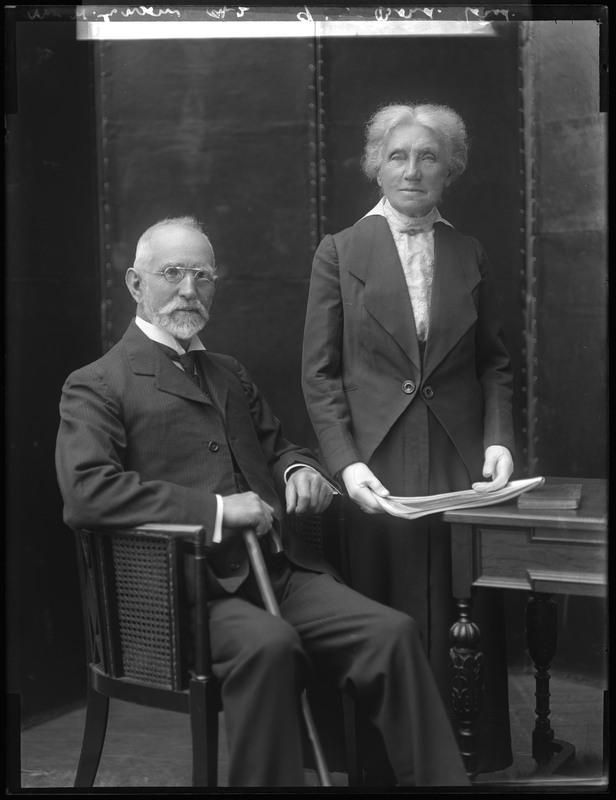 Within Christchurch many of the same individuals served on both organisations, and the two groups worked closely together. On the resignation of Louis Christie, in May 1912, Mackie was appointed Secretary of the National Peace Council.[19]

These were busy and productive years for the peace movement: Over the next few years the NPC imported or printed and distributed hundreds of thousands of leaflets, pamphlets and circulars. As Secretary of the NPC Charles Mackie also called and organised public meetings including open air meetings in Cathedral and Victoria Squares.[20] In 1912, with William Ensom, Mackie went on a tour of towns in the South Island between Invercargill and Christchurch organising meetings and trying to help set up peace organisations.[21] The campaign against the Defence Acts led to the peace movement becoming involved in other allied issues including free speech. In 1913 Mackie was convicted of charges arising from street corner speaking.[22] When fourteen young passive resisters to compulsory military training were detained on Ripapa Island, Mackie raised money for legal fees and personal expenses, organised visits and wrote letters of protest about their treatment.[23]

By September 1913 Mackie felt they were in sight of the end to compulsory military training, writing to an English friend: ‘The enemy is on the run here and a good kick will finish the business.’[24]

After the declaration of war in August 1914 the work of the NPC was closely scrutinised by the military authorities, with Mackie reporting that all his letters were being opened by the military and some boxes of leaflets sent from England simply did not arrive.[25]   It was a hostile environment for those who opposed the war and feeling against 'shirkers' ran high. Initially the National Peace Council decided not to hold any public meetings, but a study circle ran in 1914 and as the war progressed, educational ‘open’ meetings were held. The NPC continued to meet throughout the war. It corresponded with the Government on matters concerning conscription and the treatment of conscientious objectors and Mackie kept up his extensive correspondence with sympathisers throughout the country and peace organisations in England, Australia and the US.[26]

Post war, Charles Mackie continued to work faithfully as secretary of the NPC until shortly before his death in 1943, his main contribution being to maintain international contacts and an international outlook for the NZ peace movement. 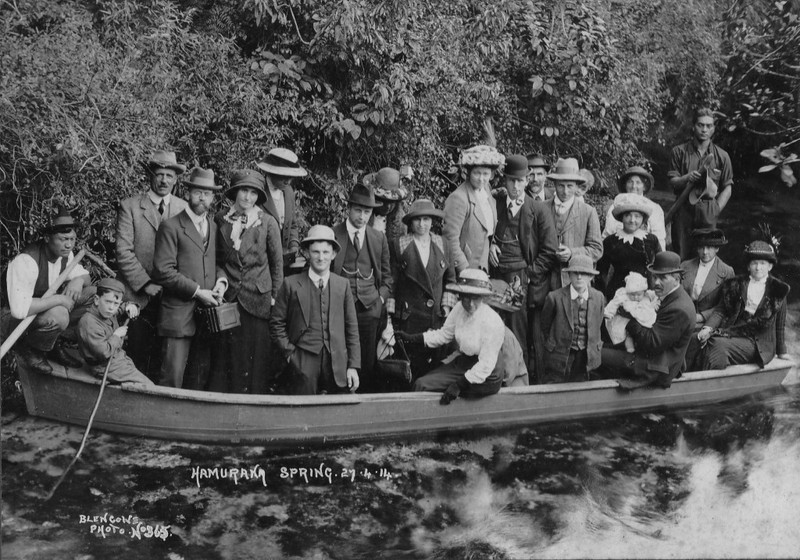 Charlies Mackie on a tourist outing

One example of this commitment is the letter Charles Mackie wrote in 1920 on behalf of the NPC to the Editor of Pax et Libertas, published by the Women's International League for Peace and Freedom. The letter expressed deep sympathy with the nations with whom New Zealand had been at war and great disappointment at the terms that had been agreed at the Treaty of Versailles:

We had hoped that when the termination of hostilities arrived some equitable and just arrangement would have been concluded which could at least have formed the nucleus of a lasting peace between the nations of the earth; but we deeply regret to see that the Treaty of Versailles makes no pretence at cementing the bonds of friendship and goodwill or of placing upon the true basis of justice and right the constitution of a World Federation…. We want you to believe that at least a considerable body of men and women here, and we are sure the same applies to all other portions of the Empire, view with detestation a Treaty which if adhered to would not only bring ruin to thousands of innocent persons, but would make a future alliance of the People for mutual good of all almost impossible.[27]

Charles Mackie's correspondence as Secretary of the NPC reveals him to be reliable and methodical in his practice of pacifism both locally and internationally. This correspondence which he tidily organised into “series” is in the keeping of the Canterbury Museum and has been an invaluable resource for historians of the peace movement.

Yet post-war there was a new generation of pacifists and organisations leading the peace movement, in new directions. According to John Cookson: 'The new generation of pacifists in the inter-war period regarded the NPC as a spent force. The gentlemanly Mackie, whose bearded elegance earned him the ironical sobriquet of “Royal Navy” Mackie, was regarded with friendly tolerance.'[28]

Charles Mackie died in October 1943 shortly after having refused to vote for Labour in the 1943 general election. 'Church and party, in the end, had betrayed him on war and conscription' said Cookson.[29]

[3]Laurie Guy, ‘Early Christian Pacifists in Christchurch: Creating Division in the Fight for Peace’, paper presented to a meeting of the Anglican Pacifist Society, 26 August 2006.  http://legacy.disarmsecure.org/Baptist%20Pacifists%20-%20Ang%20Pac%20Conf.pdf

[14]Invitation from Mackie and Christie to a meeting on 21 June to form a National Anti-Militarist League, Mackie Papers, Series 1284, Box 29, Folder 124; Report on the Work of the National Peace Council from its Inception, p. 3, 2017.38.1429, Mackie Papers, Canterbury Museum, Christchurch.