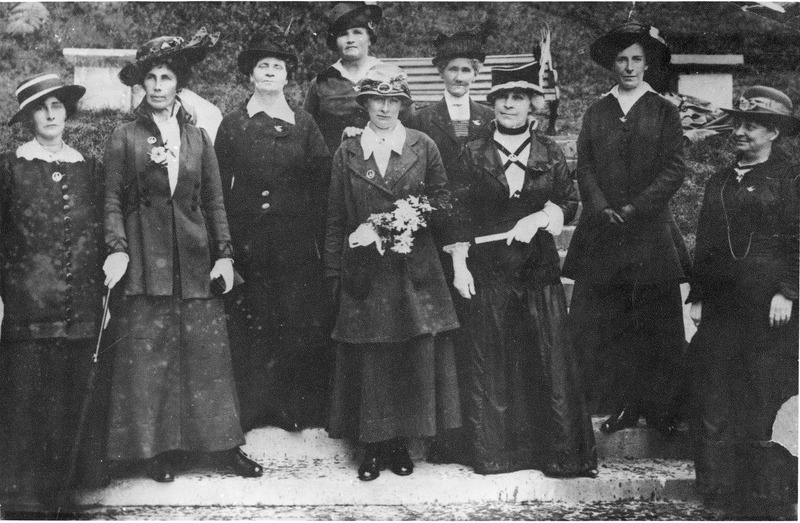 The Women's International League for Peace and Freedom (WILPF) is the oldest women's peace organisation in the world.[2] A branch of the league was meeting in Auckland by April 1916, and when Adela Pankhurst visited Auckland in May1916 a photograph was taken of her with a group of women, four of whom are clearly wearing the badges of the Women's International Peace League.[3] The Wellington branch was established by August 1916, when a statement of its objects was published in the Maoriland Worker[4] and a branch had been established in Christchurch by October 1916 when a meeting was held in the Socialist Hall.[5]

Early statements of objectives show that the league aimed to unite women around the world in a common cause of political equality for women, and peace and justice for all.

It was first established as the 'International Committee of Women for Permanent Peace' at the congress of women meeting at the Hague in April 1915, and went through several name changes in its early years before settling on The Women's International League for Peace and Freedom.

In 1915 and 1916 the League wrote to several Christchurch women including members of the Canterbury Women's Institute  - Kate Sheppard,  Christina Henderson, Ellen Vickers Howell, and Ada Wells - and also  Dr Jessie Scott, of Brookside, Canterbury. The league hoped that at least one of them would take the lead in establishing a New Zealand branch, though their letters were not immediately effective.[6]

There is evidence in newspaper reports and letters to Charles Mackie, the Secretary of the National Peace Council, that the Christchurch Women's International League (WIL), as it was then known, met regularly in 1917 and 1918 though it seems to have lapsed after March 1919. Mrs M Matherson, President and Mrs A. Gadd, Secretary, set out the principles of Christchurch branch of the WIL in their 1917 Christmas message:

We, as a Women's Organisation, are out for the cause of Humanity, not on Empire lines, but on a broad International Basis. We also extend our deepest sympathy to all women who have lost their loved ones through this awful curse of Militarism and War. Our League stands for the glorious Freedom for Women throughout the world to rear their children in peace and to teach them to love, not hate, always remembering that “The world is our country; to do good our religion.”[7]

With an international conference on disarmament coming up in Geneva in 1932 WILPF organised a nation-wide petition urging multilateral and unconditional disarmament, which was picked up by churches and peace groups around the country. Under the leadership of Lincoln Efford, a World Disarmament Petition Committee collected a total of 17,650 signatures in Christchurch, more than in any other centre in New Zealand.[12]

During the few years that the Women's International League was active in Christchurch there is some evidence that its leaders were connected with the trade unions. Perhaps its members decided their greater loyalties were with the labour movement, as the league in Christchurch seems to have lapsed by the early 1920s.[13]

A branch of WILPF in Christchurch was revived in 1999 by Mia Tay and Kate Dewes, though individuals in Canterbury had been members of WILPF for many years before this.

[6]WILPF Series III, Folders 11-13, 1915-25, Archives and Special Collections, University of Colorado, Boulder. They also wrote to Charles Mackie and Mr J.K. Worrall of Tancred, Street in Linwood, but the date is indistinct.

Emily Gibson, Auckland Branch of WILPF, to Mdlle Vilma Gluklich, Acting Secretary, WILPF, 2 April 1923 or 1933?, WILPF Archives, University of Colorado, Boulder. Gibson reported that the membership in New Zealand was very small. “At most we can only count on about forty. A couple of years ago three branches in other centres of the Dominion were affiliated to ours, but they have all ceased their activities and seem to be dead.”

Bill Leadley: An ex-soldier who changed his views →
The Women's International League for Peace and Freedom (WILPF) - The Oldest Women's Peace Organisation in the World meets in Christchurch