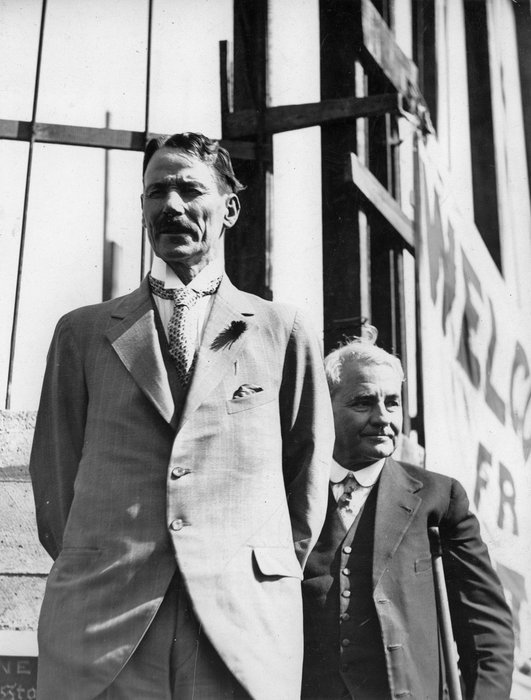 Robert Semple was born at Crudine Creek, in the New South Wales goldfields of Australia, in 1873. He began work in the Lithgow coalmines at the age of nine, and continued to work as a miner throughout the 1880s and early 1890s.

Semple married Margaret MacNair in 1898, the same year he became President of the Victorian Coal Miners' Association (VCMA). The VCMA was embroiled in a prolonged and brutal industrial dispute, and as president Semple was the highest profile union official involved in the standoff. He was subsequently blacklisted in Australia. The couple moved to New Zealand and Semple found work at the Rūnanga coalmine on the West Coast. Before long, he was elected president of the Coal Creek State Mines Union.[2]

The Defence Act of 1909 made military training compulsory for all males from the age of 12. Semple raged against this law, his instinctive anti-militarism rooted in class consciousness:

Socialists declare that the one great evil in society is the private ownership of the means of life. War today is capitalistic and is only one of the effects of this great evil ... there is a great danger in allowing these boys to be drilled by enemies of the working class.[3]

Semple implored the coal miners of the world to put down their tools, telling them that they could ‘stop the war tomorrow’. He believed that 'there [was] a class-conscious feeling rapidly growing amongst [coal miners] to embrace industrial unionism, which, needless to state, is opposed to war’. He saw industrial unionism as a major step towards the prevention of war. It meant that ‘the coal miners of the world, when an unjust war took place, would refuse to hew coal to steam those murderous machines’.[4] 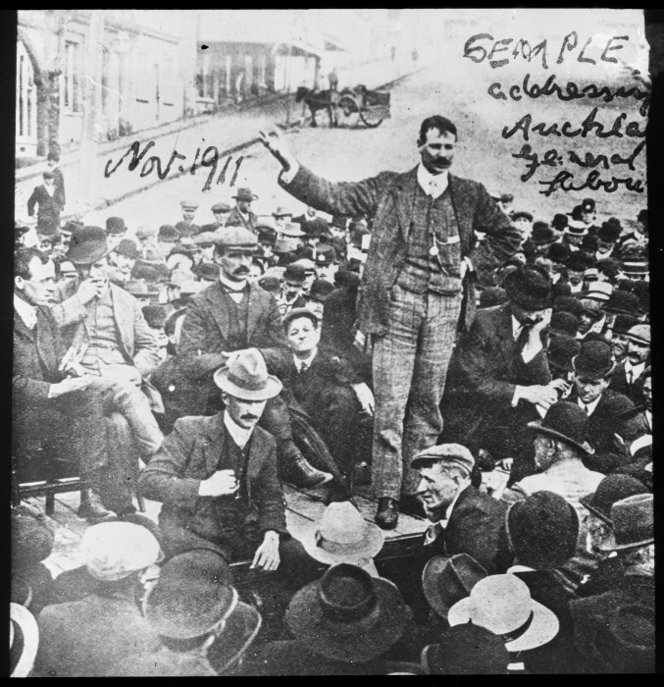 When war arrived in 1914, conscription was the inevitable fear. In 1915 the government prepared a national register of all military-age males. Semple saw the register as conscription-by-stealth, and his fears became reality when the Military Service Bill became law on 1 August 1916. Semple commenced an anti-conscription lecture tour, drawing large crowds throughout the country. At a Wellington meeting in November, he warned the audience that 'slowly but surely your liberties are slipping away', and addressing a full house at a meeting in Auckland a week later, Semple argued that ‘conscription was not intended in this country to fight the Kaiser, but to fight trade unionism and the working classes'.[5] After a third speech in Christchurch's Victoria Square, Semple was arrested and charged on four counts of seditious utterances.[6] Upon refusing him bail, the magistrate labelled him a ‘dangerous man’ and remarked that 'if bail was allowed Semple might have an opportunity [to do] mischief'.[7,8] Repappearing before the magistrate a few days later, Semple was sentenced to 12 months imprisonment, to be served in Lyttelton gaol.[9] He was soon joined by Fred Cooke, Peter Fraser and Tim Armstrong; all charged with sedition and all receiving a twelve-month sentence.[10] 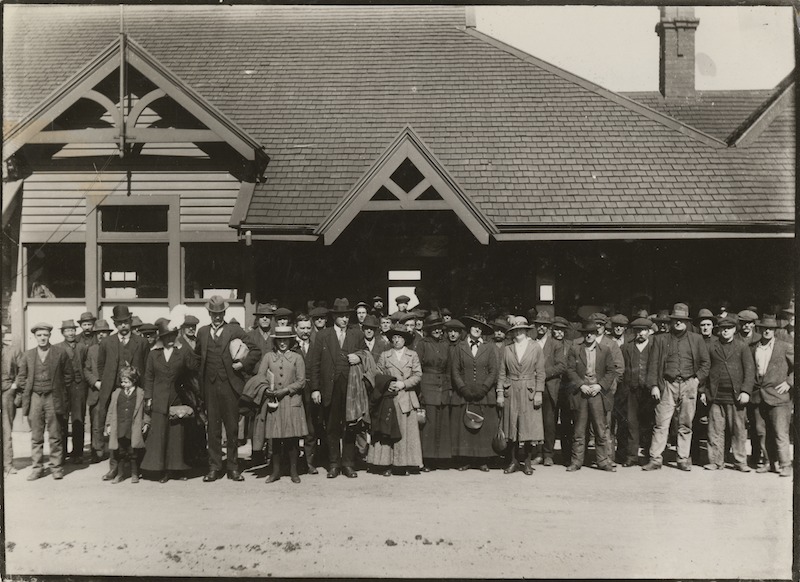 Semple welcomed upon his release from prison 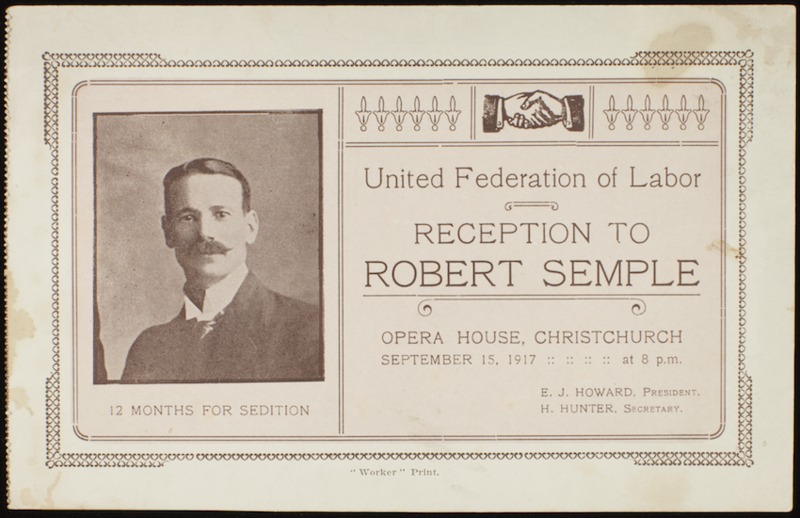 Upon his release on 14 September 1917, Semple found himself to be an immensely popular figure. Ted Howard and the United Federation of Labor organised a welcome home reception for him at the Christchurch Opera House, and both the Christchurch and Wellington welcomes were bursting at the seams. The meetings concluded with a rousing rendition of “The Red Flag” and many cheers for the jailed men, the solidarity of the Labour movement, and for Semple and his wife.[11]

Semple went on to win the Wellington South seat on a Labour ticket in the 1918 by-election, only to lose it again in the general election of 1919.[12] In 1928 he won the Wellington East electorate (later Miramar) and held it until 1954.[13]

Although Semple continued to speak out against war throughout the 1920s and well into the 1930s, his attitude changed when the Labour Government faced the threat of fascism in the Second World War. This is discussed in further detail in The Labour Legacy section of this website.