James Chapple: The socialist preacher who was jailed for sedition 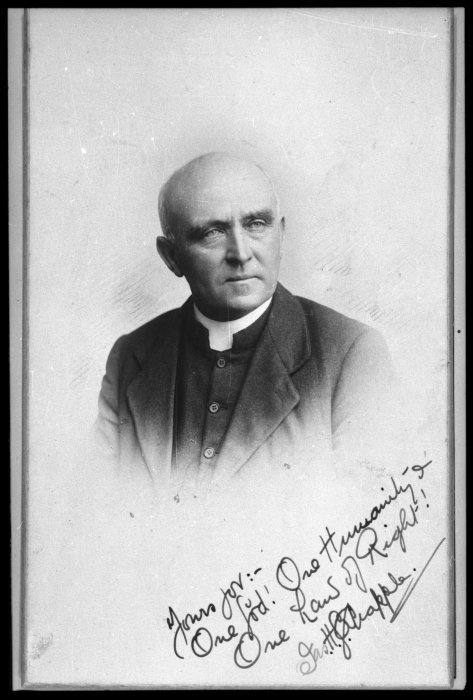 ‘“Send the best you breed,” as Kipling lines it, means the downfall of any empire if persisted in’.[1]

When the Rev James Chapple, a Unitarian minister, announced in June 1915 that the subject of his next sermon would be 'New Zealand as a Peace-loving Republic', some prominent citizens in Timaru decided that the topic was bound to cause trouble in a community that was supporting the war effort. They telegraphed the Prime Minister asking him to take action, but meanwhile the local police acted, urging Chapple to cancel the service. A crowd had assembled at the church and would have caused a disturbance if the sermon had gone ahead, though some believed there had been deliberate organisation of trouble-makers.[2]

James Chapple later published his intended sermon which began by saying that his utterance was not intended to be disloyal:

The man who desires the element of national permanence is the true patriot. Real patriotism would conserve the race and not waste it in the trenches. Every empire that has rested on the sword and bayonet has perished. It must be so by the irrevocable laws of God…. It is my firm conviction that the price of empire will yet make this New Zealand a republic. When that happens this Dominion will have a destiny.[3]

James Chapple was no stranger to controversy: His unorthodox and socialist views had already brought him into conflict during his years in Timaru. As he had said earlier that year: 'I am plodding away here in an unpopular cause and crossing the current of opinion. But now is the time to make folk think. When Theodore Parker opposed slavery (and other progressives) they were met by all kinds of hostility, the worst coming from orthodox circles.'[4]

James Chapple was born in Queensland in 1865 but spent his childhood in England. As a teenager he returned to Australia where in 1890 he married Florence Gough. Both were Salvation Army officers who served in several towns in Australia before their transfer to Invercargill in 1893. Over the next five years they served in several South Island towns until James decided to train for the Presbyterian Ministry. As a Presbyterian Home Missionary he was sent to Kumara and Eltham before being ordained to the Ministry at St Andrews, a small settlement south of Timaru, in 1903. The couple had fourteen surviving children.[5]

In 1905 he joined the Socialist Party and the socialist and rationalist views that he preached from the pulpit resulted in the Timaru Presbytery trying to have him removed. His parishioners, however, voted overwhelmingly for him to stay. He finally resigned from the church in 1910, having been asked to do so by the Presbytery, after publicly stating that ‘“the new truth of evolution” was consistent with a true and useful religion and a belief in God’.[6]

His next appointment was as librarian at the Timaru Public Library, and while there he co-founded the Timaru Unitarian church where he lectured in a hall built by a benefactor.

When New Zealand entered World War I the eldest of his children, Leonard, who did not agree with his father's pacifism, enlisted. James Chapple and his wife took their other 13 children to San Francisco where they stayed from mid-1915 until the end of 1916.

Back in Christchurch in 1917 Chapple lectured at the Unitarian church on topics such as: ‘War enables profiteers to stand on velvet whilst the poor stand in queues’.[7]  In March 1918 he was arrested and charged with sedition for words he had spoken while addressing a public meeting in the Greymouth Opera House on 29 March organised by the Labour Representation Council and attended by more than 120 people. The first charge stated that on 29 March he had said:

You are under the heels of the War Lords. . . I am hoping with a fervent hope that in this war there will be no victor. To pray about a war is blasphemy. A woman goes down the valley of death to bring a child into the world; she nurses it, sends it to school, sees it through the sixth standard; then comes a call to arms, and it goes away to war. What for? To die for its country? No. To die for the profiteer.

During the trial a police officer reported James Chapple’s words:

If Jesus Christ was now on earth he would be tried for sedition. The churches are the recruiting agent for the world's greatest tragedies. Some of the clergy were now known as the black militia. We are weeding out the best of our manhood and leaving the weeds. Where will it land you?[8]

The magistrate described him as ‘a dangerous man to be at large’[9] and sentenced him to 11 months in prison which he served at Paparua. On his release in February 1919 there was a packed reception for him in the Socialist Hall. Fred Cooke, Ada Wells, Tim Armstrong and Ted Howard all spoke, the latter mentioning the financial support that had been organised for Mrs Chapple and the family during his imprisonment.[10]

After his release Chapple resumed lecturing for the Socialist Party and officiated at the Socialist Sunday School which provided an early grounding for many later peace workers. Life-long friendships were forged there with 50 to 60 children attending in the 1920s.[11] 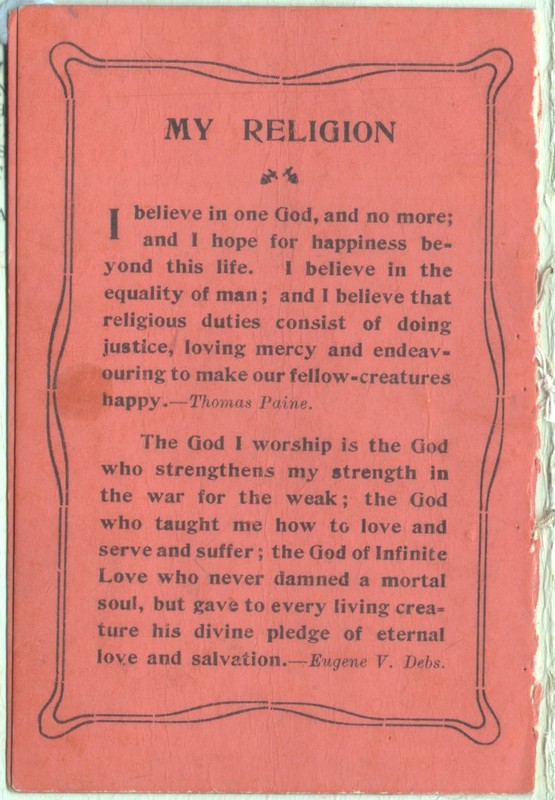 This card with its definitions of ‘My Religion’ belonged to Lincoln Efford, a member of the Socialist Sunday School in the 1920s. 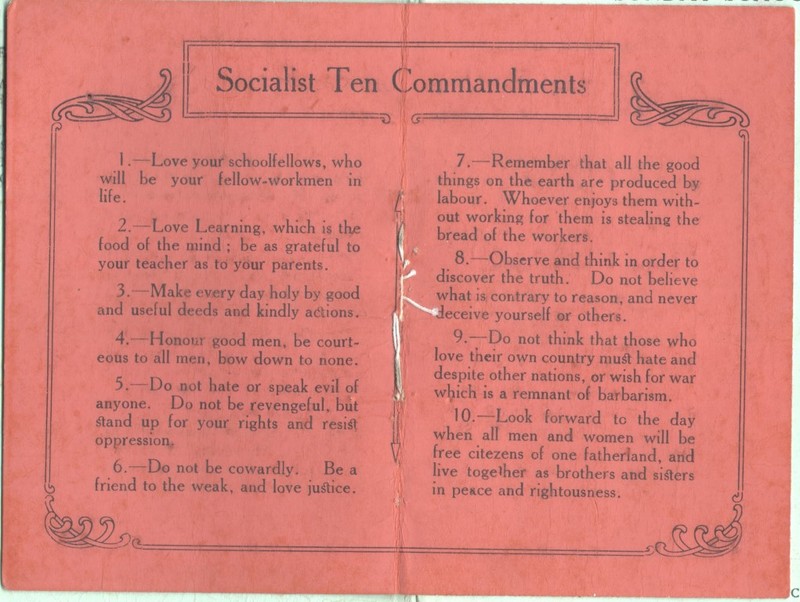 Lincoln Efford's 'Socialist Ten Commandments' card, dating from his membership of the Socialist Sunday School in the 1920s.

We desire to be just and loving to all men and women; to work together as brothers and sisters; to be kind to every living creature, and to help to form a new society with justice as its foundation and love as its law.[12]

A member of the Sunday School, Muriel Morrison, later recalled Chapple as:

a tall dignified figure dressed in a long black overcoat with a red rose in his buttonhole, leading the children in the School’s own set of hymns of justice and peace which merged socialism and pacifism; the debates, sometimes forceful, on the perils of capitalism and militarism; and above all, the close feeling of family as the faithful harmonised to create a new society.[13]

Chapple retired to Tauranga in 1925 and then moved to Auckland in 1929. In his retirement he continued to lecture for the Unitarian church and for the Rationalist Association.

In the 1970s writer Maurice Gee wrote the widely acclaimed novel, Plumb, based on the life of his grandfather, the Rev James Henry George Chapple.

← Bob Semple: Miner, unionist and Labour politician
Ted Howard: A champion of the working class →
James Chapple: The socialist preacher who was jailed for sedition