‘In New Zealand today no man is allowed a conscience unless his conscience has the hallmark of state approval. It is futile to put conscientious objectors into gaol, or to punish or torture them otherwise, as that could not kill their consciences.’[1]

Both John Roberts and his brother James Roberts played a part in campaigning for the rights of workers and against conscription during World War One. As a result, both were court martialled and imprisoned during the war. An active trade unionist and socialist  his whole life, John Roberts once declared when looking back on World War One that ‘the only place for a decent socialist at that time was gaol’.[2]

John Roberts was born in Holbeck, Leeds in 1885. His father, a textile worker, was active in socialist politics as a foundation member of the Independent Labour Party (ILP) and later as a union secretary. John’s own enthusiasm for socialism was first stoked at the age of seven when he was taken by his father to see Keir Hardie, leader of the ILP, speak at a choir contest. Roberts later recalled also attending the first Socialist Sunday School in the UK at a Labour Church where his father worked as an unpaid caretaker, along with his older brother James. In this setting he was exposed to many speakers, including James Connell, author of socialist hymn, the Red Flag.[3]

John trained as a presser in the clothing trade, which was the dominant industry in Leeds at the time, and joined both the Independent Labour Party and the trade union, the British Amalgamated Association of Clothiers’ Operatives.[4] 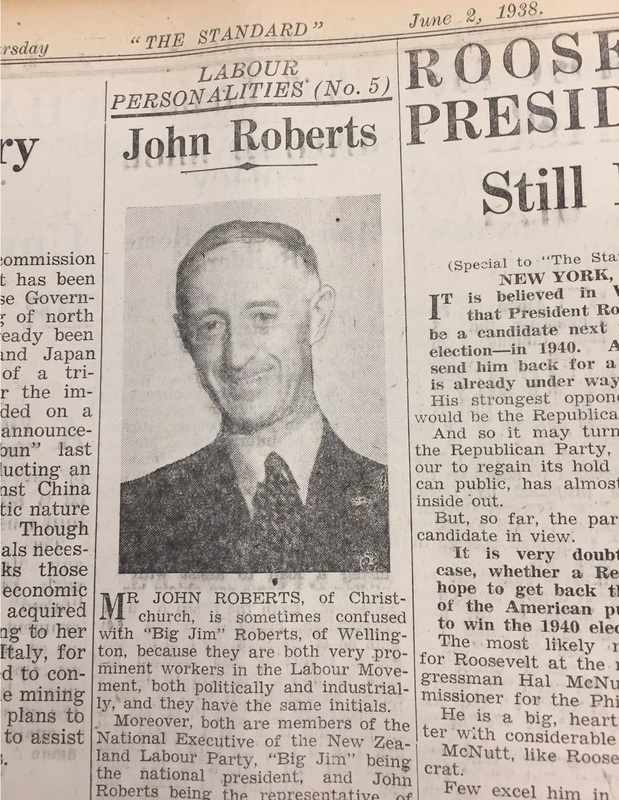 John Roberts emigrated to New Zealand along with his future wife, Agnes Farrar, arriving on Boxing Day 1908.[5] After settling in Christchurch and finding work as a presser, he wasted no time in joining the Christchurch Socialist Party in early 1909.[6] He was similarly active in local trade unions, joining the Christchurch Tailoresses’ and Pressers’ Union upon his arrival. John and Agnes were married at St John’s Church, Woolston in December 1911.[7] By 1914 Roberts had become Secretary of the Woolston branch of the Christchurch Socialist Party, which was by this time affiliated with the national Social Democratic Party.[8] As part of the labour movement’s wider campaign efforts against militarism, Roberts was elected to the Woolston Borough Council in April 1917.[9] Roberts ran on an explicitly anti-conscription ticket in this campaign.

Roberts’ political career was to be short-lived as he was balloted and called up for military service on 21 November 1917.[10] Roberts refused to submit himself for medical examination, ‘because he was a conscientious objector,’[11] and as a result was court martialled at the King Edward Barracks on 7 March 1918, alongside Kennaway Henderson. During the court martial, the Lyttelton Times reported Roberts saying ‘he could plead guilty quite easily to refusing to be medically examined, but he refused to plead guilty to disobeying the command of a superior officer, because he recognised no superior officer’. He offered no evidence in his defence, but requested to be allowed to make a statement. In this statement he declared that ‘as a socialist he believed that all wars were waged for economic ends, for the capture of new markets, and he had no desire to assist such ends’.[12] He further stated that, as a humanitarian, ‘he believed that human life was sacred, that killing was murder, notwithstanding that it was by order of the State, and under the blessing of the Church’. The Maoriland Worker reported Roberts’ statement that it was ‘futile to keep on jailing conscientious objectors. For every one imprisoned, three more would spring up’.[13] Roberts’ impassioned remarks in defence of his conscientious objection were met with applause from the spectators at Court.[14] The courts recorded a plea of guilty and Roberts was sentenced to eighteen months imprisonment, double the nine month sentence received by Kennaway Henderson.[15] Following his sentencing a motion was proposed but not passed by the Woolston Borough Council that the Council ‘emphatically protest against the unjust sentences passed on conscientious objectors at the recent Court Martial held in Christchurch’.[16] Roberts resigned his councillorship from prison shortly afterwards.[17]

John Roberts’ brother James Henry Roberts was also imprisoned as a conscientious objector during World War One. Two years older than John, James had also settled in Christchurch. He worked as an electrical fitter, and was married to Nelly Dawe in 1911.[18] A fellow member of the Woolston branch of the Social Democratic Party,[19] James was called up for service after John, on 13 April 1918. Appearing at Court Martial on 2 July 1918, James also opted to make a statement declaring his beliefs before the Court. He stated that:

[H]is judging of right or wrong was by a standard of morality, not legality. Parliament could make “any old thing” legal, not saying that it was right, but just put it forward. Since the war began they had been told by the pulpit, Parliament and the Press that there was a great deal of difference between British militarism and the Prussian brand – that it was only in Germany that husbands were dragged from their families. The Court had married men before them that day, and if they had a spark of manhood in them they would not drag husbands and fathers away from their wives and children, upon whom suffering would consequently fall.[20]

Once again, James Roberts’ statement was met with applause from the public section of the court room. However, he failed to sway the magistrate and was sentenced to one year’s imprisonment, receiving the formal designation of a ‘defiant objector’ from the Defence Department.[21]

The ongoing influence of the Socialist Sunday School on the beliefs of the Roberts brothers is clear. The ‘Ten Commandments of Socialism’, which were popular in the Socialist Sunday School movement in the UK in the early 20th century, included both ‘#9. Do not think that those who love their own country must hate and despite other nations, or wish that, which is a remnant of barbarism’ and ‘#10. Work for the day when all men and women will be free citizens of one fatherland, and live together as brothers and sisters in peace and righteousness’.[22] Writing in 1954, John Roberts also emphasised the influence of the British ILP’s anti-militarism and opposition to conscription on his own beliefs. Many ILP leaders including Fenner Brockway were also imprisoned in Britain, either as conscientious objectors or for speaking out against conscription.[23] 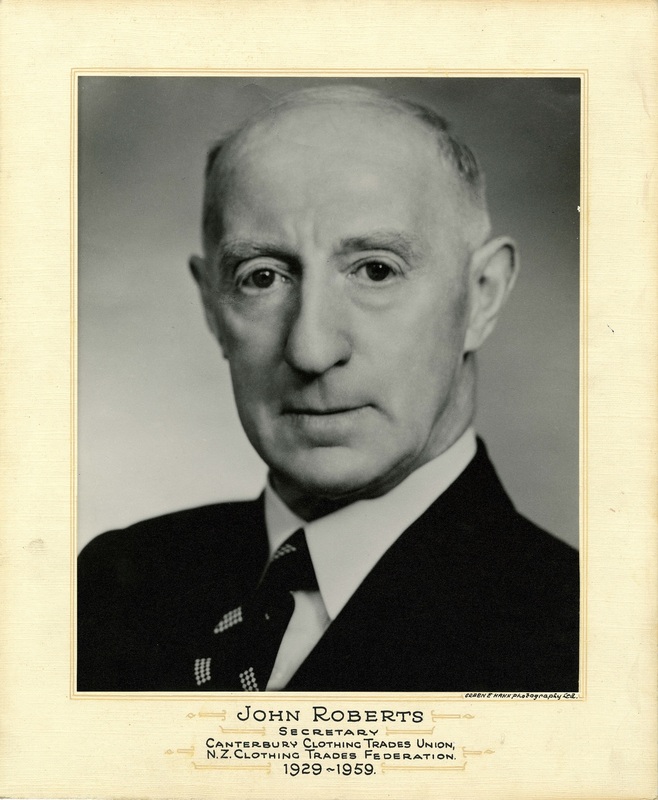 John Roberts maintained his socialism, trade-unionism and anti-militarist attitude for the rest of his life. Although he was added to the Military Defaulters List and thus excluded from voting or holding public office for ten years following the war’s conclusion, he held a number of trade union roles in the years after the war, such  as president of the Christchurch Tailoresses’ and Pressers’ Union in 1919 and 1921. Following Fred Cooke’s death in 1930, Roberts succeeded him as secretary of a number of unions including his own Tailoresses’ and Pressers’ Union, the Christchurch Tailoring Trade Union and the Christchurch Dressmakers’ Union. Roberts worked to expand and amalgamate these unions within the Canterbury clothing trade, and his efforts were clear by 1941, when the various separate unions became the Canterbury, Westland, Nelson and Marlborough Clothing Trades Union.[24] In addition to union roles, John held roles in the Labour Party including a position on the party’s national executive, and was president of the North Canterbury Labour Representation Committee. A profile of John Roberts in the 2 June 19138 edition of official Labour Party newspaper The Standard attributed ‘much of the credit for the success of the Labour candidates in recent municipal elections’ to him.[25]

Roberts maintained his anti-war principles throughout his life. As president of the Christchurch Peace Council he actively opposed conscription during the Second World War. In 1949, Roberts resigned both his Labour Representation Committee and Labour Party national executive roles on the introduction of compulsory military service because of  his ‘uneasiness over the conduct of the military service referendum and the submerging of many planks of Labour’s original platform’.[26]

A colleague had declared at a memorial dinner held for John upon his retirement in 1959 that: ‘He has made sacrifices for his principles. He has never been a yes man. He is loyal and law abiding and he has had the courage to defend the workers against bad law and injustice, in opposition to which he has suffered injustice and been gaoled.’[27] Similarly, when remembering John Roberts in an obituary published following his death in 1962, the editor of the New Zealand Monthly Review recalled John’s imprisonment for conscientious objection: ‘He often told me that if he had to live again, he would take the same stand. He believed in, and worked for, peace … He loved his fellow men wherever they lived, of all colours and creeds …. Winning a battle was not the deciding factor for John Roberts. The right cause was all that mattered.’[28]

Three years after John’s death, his older brother James Roberts passed away on 23 August 1965 aged 82.[29] James was survived by one daughter, Dorothy.