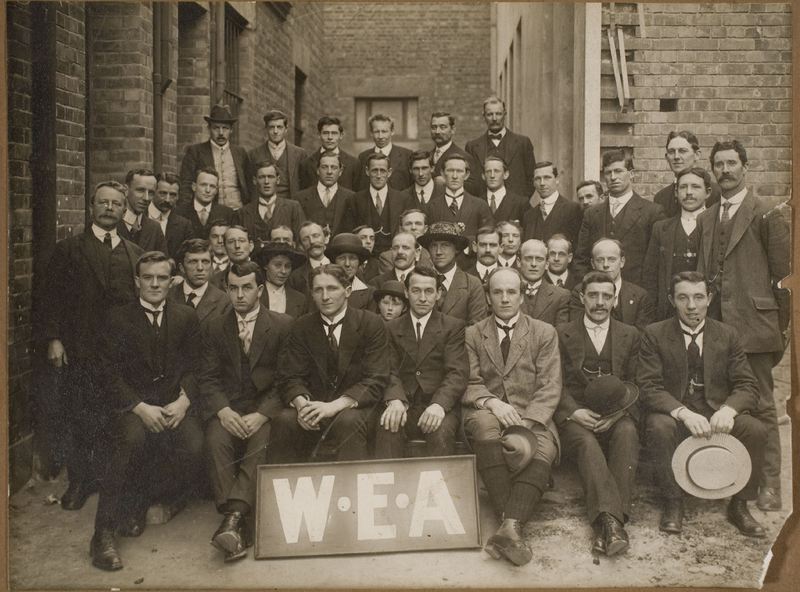 Workers' Educational Association Foundation Students, 1915. Reg Williams is standing in the back row, third from left.

‘I have nothing to apologise for. I have spoken what I believe to be the truth. I am an Internationalist, opposed to war, and I shall oppose it as long as I have a tongue in my head’.[1]

Reg Williams was an articulate speaker and writer against militarism who stands out for the number of times he was arrested and imprisoned, and the variety of charges brought against him.

In the pre-war period he was imprisoned for 'wilful blockage of traffic'[2] and street speaking. He also lost his civil rights for two years[3] and once the country was at war he was imprisoned for expressing seditious intention and disobeying a lawful command given by his superior officer.

Edward Reginald Williams was born in Woodbridge, England on 14 June 1892 and arrived in New Zealand in 1910 on the Ionic, with his occupation listed as draper.[4] When he was arrested in 1917 he described himself as a farm worker most recently employed by his brother Morgan Williams of Ohoka when he was arrested in 1917.[5] Little is known about his family background except that his brother, was also a committed pacifist, wrote a 24 page anti-militarist pamphlet, The Great White Elephant,[6] and helped the National Peace Council to organise anti-conscription meetings in the Rangiora and Kaiapoi area in 1912.[7]

Reg Williams first came to notice as one of the joint secretaries of the newly formed Passive Resisters Union (PRU) in February 1912,[8] and later became president of the PRU and publisher of its magazine. While he was President of the PRU Williams served time in Lyttelton Gaol and in June 1913 was one of the fourteen young men who were arrested and detained in Fort Jervois on Ripapa Island. His accounts of his prison experiences were later published in the PRU's Repeal magazine in May 1913 as 'The Truth about Lyttelton Gaol' and in August 1913 as 'The Ripa Island Farce'.[9] 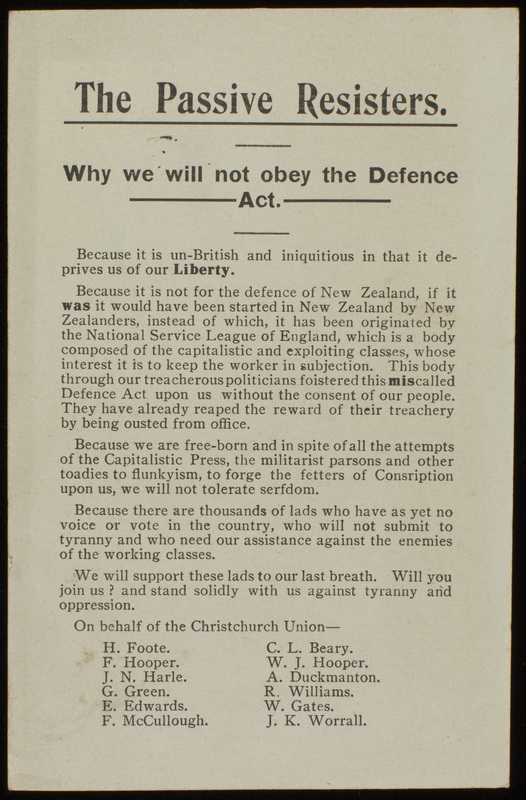 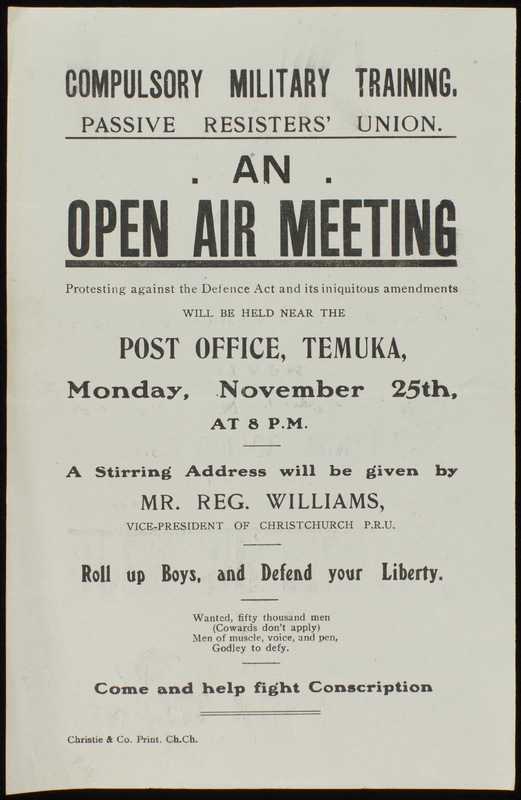 Reg Williams went on at least two speaking tours during this period: to the West Coast in 1912, and to Auckland, where he spoke on about 10 occasions in 1914.[10]

Reg Williams was also among a cluster of labour leaders arrested in early 1917 on a charge of seditious intention. His case was heard before a crowded courtroom on 24 January 1917. Conducting his own defence Williams said that he did not think there was anything in the war regulations that prevented him from producing arguments that conscription was futile and ineffective, or to stop him from calling for the repeal of the Act. The extracts cited in court might appear seditious but were not if read in their context. He had a perfect right to question the reasons for conscription:

When Lord Tennyson wrote, “Their's not to reason why, their's but to do or die,” he was casting a stigma on the soldiers, for any intelligent working man has a right to question why he should give his life. He was more of a patriot standing in the dock to defend the working class against a blind Government, standing up for the rights of free speech, than the howling flag-waggers who week after week got up in different places in the city. . . . I have nothing to apologise for. I have spoken what I believe to be the truth. I am an Internationalist, opposed to war, and I shall oppose it as long as I have a tongue in my head.[11]

The magistrate was not impressed and sentenced Williams to 12 months imprisonment. As he left the dock he waved to his friends in the Court and some of the crowd sang the Red Flag and cheered.

It is not clear where he served his term of imprisonment during 1917 or whether he completed the sentence before being arrested again later the same year, this time for failing to attend a Medical Board when ordered to do so. Evidently his name had come up in the ballot for conscription.[12]

In June 1918 he was awarded a 'Sentence of Detention' and sent to the Wanganui Detention Barracks.[13]

In August he was back at Trentham Military Camp for his Court Martial. Here he was sentenced to imprisonment with hard labour for two years - a handwritten note at the bottom of the record of his Court-martial says: 'This man is a defiant objector'. [14]

By September 1918 Williams was in the Waikeria Reformatory and reported that he was content to be there - the gardening work was congenial, and he was in good health.  In his spare time he was studying Spanish and shorthand.[15]

This image of Waikeria Prison comes from a Government Publication called 'The Evolution of the Prison System', published in 1923. It shows a view of the prison from Reservoir Hill. 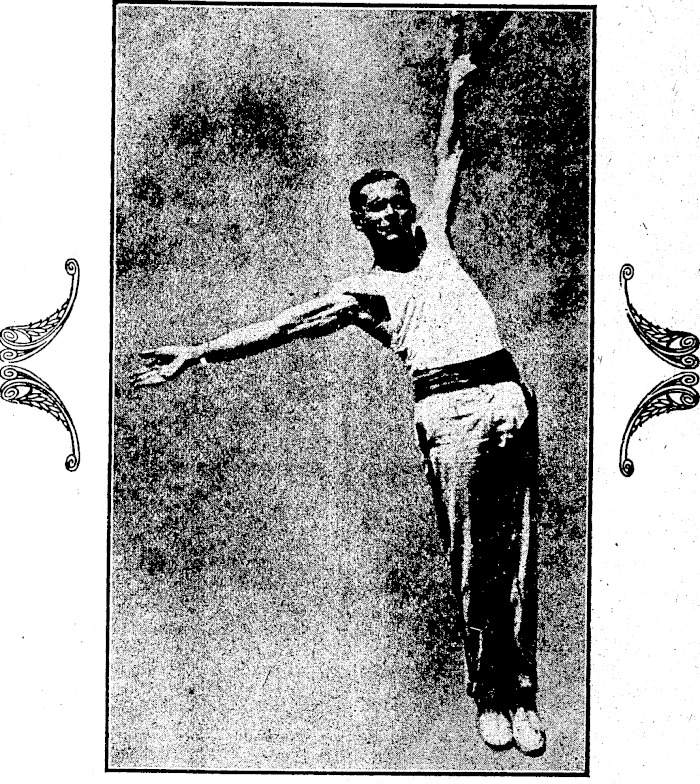 By January 1919 he was living in a hut with three others at a 'camp on the farm' that belonged to the reformatory. He was pleased with the change and with the fact that they could swim in the river on Saturdays and on holidays. He also gave a full account of his interview with the “Conscience Board” in March 1919 and seems to have enjoyed some theological debate with the members of the Board. He was obviously disappointed when he was not found to be a 'genuine' objector, but put on the defaulters' list and said he planned to appeal.[16]

In September 1920 Williams wrote from an address in Kaiapoi describing the two-horse wooden caravan he intended to make that would convert into a stage for meetings, and be a travelling bookshop, while also providing a home for the vanner and his mate.[17] He was later reported to have 'resisted overtures to become a Labour mouthpiece post-war and instead became a rather idiosyncratic figure touring the country preaching peace from a small gypsy caravan'.[18]

His later life was no less colourful than his war years. In the 1930s he was a trapeze artist ‘Delgado’ in a vaudeville show, with an act called the ‘Slide of Death’. Described as ‘a hair-raising exhibition’, the act consisted of Delgado sliding on pulleys from a height of 40 feet down a steeply inclined tight wire before somersaulting at tremendous speed into a canvas sheet held ready for him. Performing this act eventually led to a serious injury.[19]

By the 1940s he was living in Wellington where he described himself as Director of the South Pacific Aquarium and in 1951 A.H. and A.W. Reed published his book Let’s Look at the Sea, based on the creatures he had in the aquarium. He married but had no children and his wife did not accompany him when he moved away from Wellington.[20]

In the early1950s he had a mini-zoo at North Beach in Christchurch but by 1954 was living in Napier. He had a travelling aquarium which he took to Napier and set up on Marine Parade opposite the soundshell (but which was not connected with the later Napier Aquarium).

While working in the office of the Napier Gas Works, he also wrote and illustrated a nature column in the Napier Daily Telegraph and broadcast a nature programme on the local radio station.[21]

In later life his main interest was the gannet colony at Cape Kidnappers. He set up a group of Junior Wildlife Wardens who built a bunkhouse at Cape Kidnappers and stayed there each weekend and in the holidays to protect the gannets from vandals. In 1957 Reg’s book The Gannets of Cape Kidnappers was published, and includes a photograph of the author speaking to a group of visitors to the colony.[22]

Keen conservationists Bill and Ron Hartree, also became associated with the Junior Wildlife Wardens and would take the boys into the bush on educational trips, camping in the Hartree woolshed. After Bill Hartree’s death his wife Audrey gave 14h of regenerating bush to the Crown: this later became the William Hartree Memorial Scenic Reserve. Reg Williams and the Wildlife Wardens then worked to erect a ‘bush biological research station’ which was opened in 1967.[23]

Reg Williams died in Napier at the age of 84 and was buried in the Wharerangi Cemetery in February 1976. His many books were given to the Aquarium Library and the Colenso High School Library. Two typescripts on Pacific Islands he had visited are also in the aquarium library while a third typescript about Cape Kidnappers came into the hands of the Department of Conservation.[24]

[6]'The Great White Elephant' by Morgan Williams was advertised in The Repeal of March 1914 as a 24 page anti-militarist pamphlet.

[20]Email to author from Peter Williams, 12 January 2017, including notes about Reg Williams provided by Gordon Dine in 2003.

[21]Email to author from Peter Williams, 12 January 2017, including notes about Reg Williams provided by Gordon Dine in 2003.

[24]Email to author from Peter Williams, 12 January 2017, with notes about Reg Williams provided by Gordon Dine in 2003.