Help from Abroad: T. C. Gregory and the Advice to Emigrants Campaign

‘NOW IS THE TIME IN TIME OF WAR TO AGITATE FOR PEACE and all that pertains to it. Now is the time to circulate pamphlets, to talk, to speak on the pavement to individuals on the road and on the pavement as opportunity arises.’[1]

Writing soon after the outbreak of war T. C. Gregory, an English Quaker and a member of the Bristol Friends’ Peace Federation was appalled by what was happening in Europe. In a personal letter he expressed his horror at what was taking place in typically heartfelt and colourful language:

The awful and disastrous conflagration now unfolding all its horrors, seems at times like some hideous, most hideous night-mare, with no reality about it. . . .  mere lads, the bulk of them, goaded and cajoled, and jeered and coerced into joining the fray, are seen in their hundreds marching about, till shipped to the slaughtering trenches eventually, to have THEIR LIVES SMASHED OUT OF THEM because of the wicked machinations of their so-called superiors.’[2]

Having spent the last three years campaigning against compulsory military training in the British colonies Gregory was facing the ghastly reality that his efforts seemed to be have been in vain.

Thomas Churchus Gregory was a clerical worker whose quiet life in Bristol had been suddenly transformed when he was sent a copy of the New Zealand Defence Act of 1909. He was so astounded to find that a British Colony was introducing Compulsory Military Training that he published a leaflet about the Act with the intention of letting people in his own neighbourhood know about it.  At the time the English National Service League was campaigning for compulsory military training to be introduced in Britain, and Gregory could see that the New Zealand move was a useful precedent for the British campaign.[3] 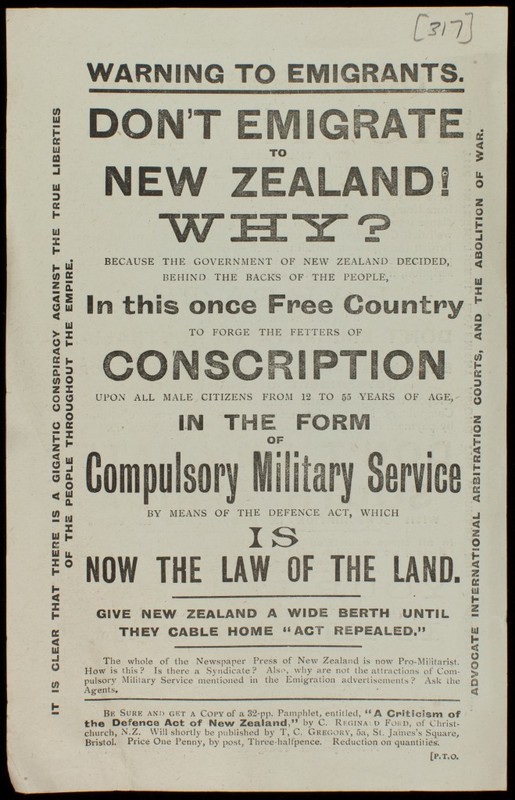 A one-page leaflet published by T. C. Gregory of Bristol in January 1912.

By chance Gregory’s leaflet came into the hands of Colonel Keene, the organiser of the National Service League. Keene wrote an article for the Morning Post newspaper in London, which criticised the leaflet and its author and incidentally supplied Gregory’s name and address. This article was then picked up by the New Zealand newspapers, again with Gregory’s name and address supplied and soon Gregory began to receive letters from anti-militarists in New Zealand giving him further information about the working out of the Act and the opposition to it.[4]

Deciding that the issue was too great to ignore Gregory began to publish further leaflets warning would-be British emigrants from making New Zealand or Australia their destination. Working as he did for a printing works Gregory seems to have been accustomed to issuing pamphlets.[5] 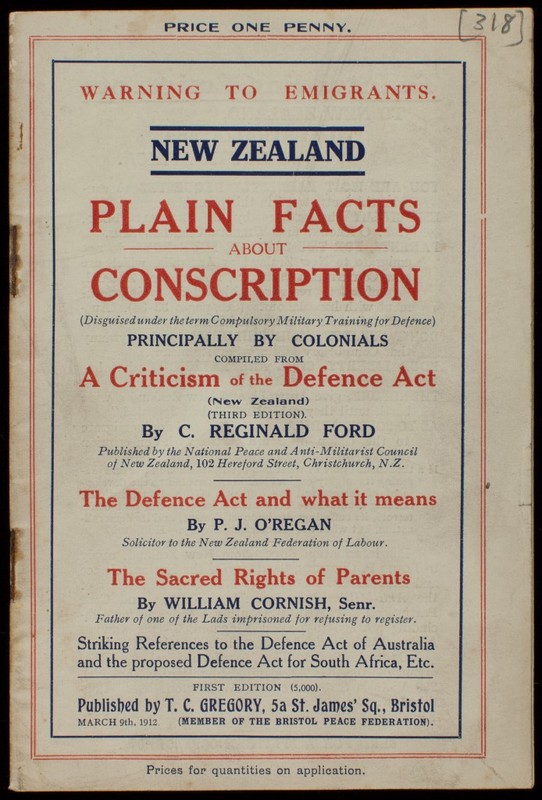 The front cover of a 36-page booklet published by T. C. Gregory of Bristol in March 1912. It was compiled from writing by New Zealanders.

His one-page leaflet ‘Warning to Emigrants: Don’t Emigrate to New Zealand!’ with warnings about Australia and South Africa on the reverse side, was published in January 1912, and was followed by a booklet, ‘Warning to Emigrants: New Zealand: Plain Facts about Conscription’ in March 1912. This booklet was compiled mainly from writing by New Zealanders and included extracts from C. Reginald Ford’s booklet, ‘A Criticism of the Defence Act’; a statement about the Defence Act by P. J. O’Regan, solicitor to the New Zealand Federation of Labour, and an article by William Cornish, father of one of the imprisoned resisters, called ‘The Sacred Rights of Parents’. At least ten other leaflets were issued over the next two years; some of them ran to several editions and the print runs were often in the tens of thousands. A ‘Warning to Emigrants’ published in January 1913 was the 4th edition and had a print run of 25,000.[6] 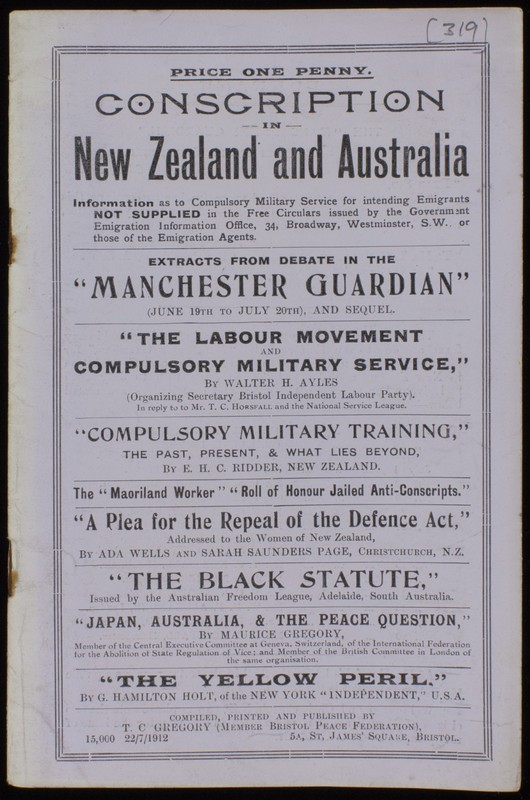 The front page of 'Conscription in New Zealand and Australia' published by T.C. Gregory of Bristol in July 1912. It includes writing from both Britain and New Zealand.

Thomas Gregory was born at Bristol in 1861, the son of Thomas and Maria Gregory and was descended from a long line of Quakers on his father’s side. Having excelled in history and maths he was dux of the Quaker public school Sidcot and was noted throughout his life for his tremendous energy despite the fact that from his school days he suffered from chronic asthma. On leaving school he worked first for his father, then for Tanner Brothers in Bristol. Later he established his own business but had to abandon this and return to being an employee.  With his wife Eliza he had two children, Thomas Edmund and Elsie.[7]

Gregory was about 50 when he began his campaign against Compulsory Military Training in Australasia. As well as issuing leaflets he wrote letters to the English newspapers, including the Manchester Guardian, addressed meetings, and gave out pamphlets to prospective emigrants. He attended meetings of the National Service League and questioned the speakers. He also wrote to the New Zealand High Commissioner in London on several occasions and challenged him publicly in print.[8]

Freedom of belief and freedom of conscience had been hard-won by the founding members of the Society of Friends (Quakers) in England and Gregory made it his mission to alert the British public to the ease with which these precious rights could be eroded. As Gregory wrote in a fund-raising open letter of 1912:

THE TIME AND THE DAY IS NOW to resist to the uttermost this desperate attempt on the part of militarism and the pro-conscriptionists to fetter the people and deprive us of the great heritage of civil and religious freedom which our forefathers won for us centuries ago at the cost of so much toil and stress and suffering in the cause of truth.[9] 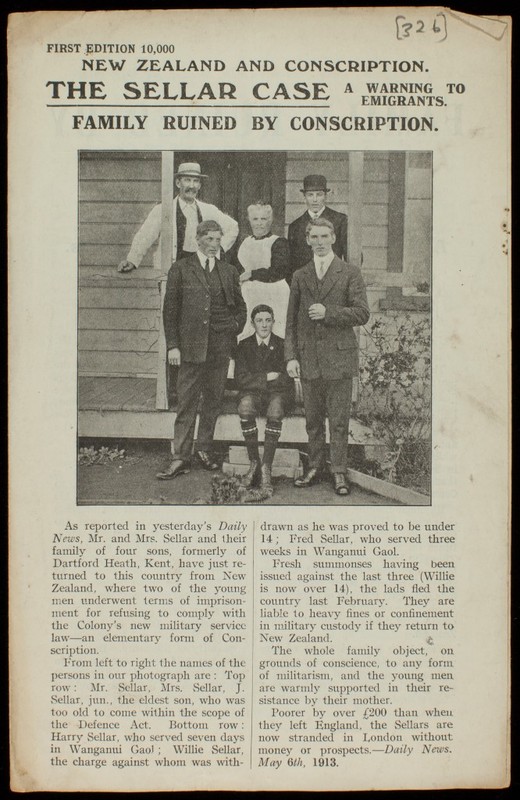 A pamphlet published by T.C. Gregory of Bristol in May 1913, featuring the Sellar family.

The experiences of one British family, publicised in one of Gregory’s pamphlets, was a striking example of what could happen to unwitting immigrants. Mr and Mrs Sellar and their family of four sons emigrated to New Zealand from Dartford Heath, in Kent, in 1911. The whole family were strongly anti-militarist and horrified to find that their middle two sons were liable for compulsory military training. After refusing to drill, being convicted and fined, they served time in Wanganui Prison for failure to pay their fines. After their release fresh summons were issued against the three younger boys in the family, the youngest one, Willie, now having turned 14. This prompted the family to flee the country in February 1913. They were reported to be stranded in London without money or prospects, their sojourn in New Zealand having cost them more than two hundred pounds.[10] ‘What we are inclined to complain of most bitterly’, Mr Sellar was reported as saying,’ ‘is that we were not told before we went out. I hope our case will be a warning to others’.[11]

Other English Quakers also took up the cause. A leaflet entitled ‘Boy Heroes for Conscience Sake in New Zealand’ was signed with the initials E. J. P. (believed to be Elizabeth Josephine Peckover, niece of Priscilla Peckover, founder of the Wisbech Peace Society) and began with the information that:

Boys from 14 years upwards, whom the recent Defence Acts of New Zealand consider to have no conscience because they are under 21, are being prosecuted and imprisoned, some with hard labour and solitary confinement, merely because their belief in the New Testament teaching of the brotherhood of man compels them to refuse compliance with the newly enacted regulations for military drill.[12]

The leaflet went on to cite various examples of resistance to the Act from New Zealand but also the story of a seven year old boy in New Zealand found weeping into his pillow, concerned that at the age of 14 he might have to kill someone’s father.[13]

Supporters in Africa and Canada were also kept informed of developments in Australia and New Zealand because Gregory foresaw that moves would be made to introduce compulsory military training in other British colonies.[14]

In July 1914 Gregory urged Charles Mackie of the New Zealand National Peace Council, to send as much information as possible to the Women’s Labour League and said that the pamphlet ‘The British Conscript: A Warning to Mothers’ was about to be issued. At the same time he hinted at various disagreements from within the peace movement in Britain when he said that issuing a ‘trumpet-tongued warning to emigrants’ had not been approved by some influential peace advocates and he regretted that the Friends’ Peace Committee had decided to cease circulation of the card ‘To those thinking of emigrating’. In his view it should have been distributed wholesale. In the same letter Gregory advised that he would have to curtail some of his work as the strain had proved too much for his health. [15]  Two months later he was planning a holiday with his wife to try and restore his health but just three months later at the age of 53 he was dead.

The Secretary of the New Zealand National Peace Council, Charles Mackie, had no doubt that Gregory’s death was brought about by the stress and over-work which the anti-conscription campaign had brought into his life. After T. C. Gregory’s death his brother Alfred wrote that ‘practically his life’s work began and ended in the last three years. . . . He fulfilled his mission’. [16]

Charles Mackie paid tribute to Gregory’s monumental work and indefatigable labours, which were based on a ‘heartfelt need’ and ‘the realisation of the fact that our work was an EMPIRE WORK and not merely restricted to the narrow limits of these Islands’.[17]

[8] John P. F. Fletcher to Charles R. N. Mackie and T.C. Gregory, 12 August 1913, Mackie Papers, 2017.38.2412, Canterbury Museum, Christchurch. Writing to Gregory from New Zealand fellow English Quaker and peace worker, John Fletcher, described meeting a recent arrival from England who had been given a copy of ‘Conscription in New Zealand Australia’ before she left Hull. She used the leaflet on the ship to open a debate on conscription in New Zealand with the result that a great many of her fellow travellers became very interested in the topic and read her copy of the booklet

← Charles Morgan Williams: the anti-war Kaiapoi farmer who became a Labour MP
John Percy Fletcher, the Society of Friends and the Campaign against Compulsory Military training in New Zealand, 1909-1914 →
Help from Abroad: T. C. Gregory and the Advice to Emigrants Campaign