'Our forefathers fought hard and long for the liberty we now have, and we will not surrender it to the military despots while we have breath to last out.' [1]

Although the Passive Resisters Union (PRU) was officially formed in early 1912, there were anti-militarist rumblings in the years leading up to its formation.

The movement had its roots in resistance to the Defence Act of 1909. The Act established a Territorial Force: compulsory military training (CMT) for junior cadets from 12 to 14 years of age, senior cadets from 14 to 18, and territorials from 18 to 21, later extended to 25 years.[2]

In April 1911, the government commenced registration of all males aged between 14 and 20. This continued through until mid-July, by which time the government had a roll of over 30,000 men and boys available for the Territorial Force.[3] 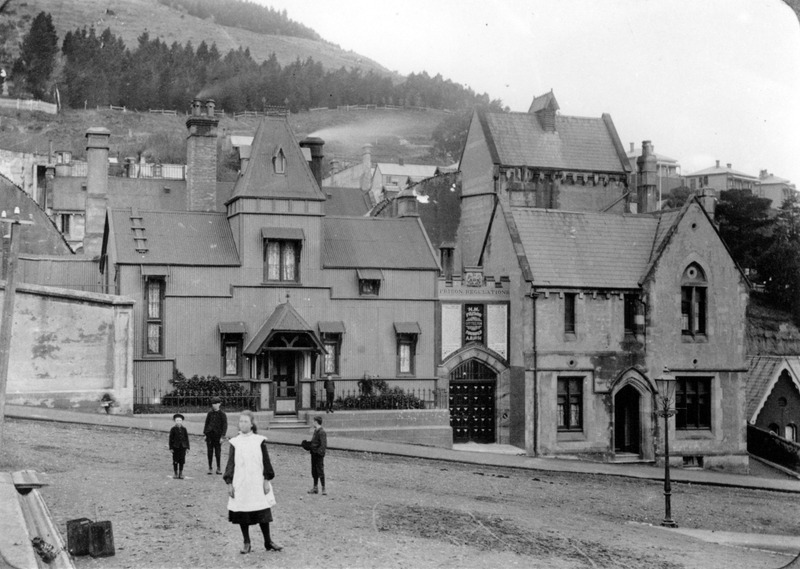 Lyttelton Gaol at the turn of the century

In June 1910, the Anti-Militarist League was formed in Christchurch by Louis Christie, editor of the Christian Herald, and in May 1911, Charles Mackie and Harry Atkinson founded the National Peace Council.[5] An anti-Defence Act protest was held on 26 May at the Salvation Army barracks, attended by many sympathisers, and including the socialists Ted Howard and Fred Cooke.[6]

The ideological attack on Compulsory Military Training (CMT) was two pronged. The Peace Council attacked the policy from a moral standpoint: the concern that military authority would supersede parental authority; that barrack life would have a negative moral effect on young men; and that military might would be conflated with peace.[7] The socialists, on the other hand, presented CMT as part and parcel of class war, with Bob Semple warning of the ‘great danger in allowing these boys to be drilled by the enemies of the working class'.[8]

The Passive Resisters Union was formed in February 1912 at the Addington Railway Workshops, with James Worrall and Reg Williams appointed joint secretaries.[9] By the beginning of March the union had 217 members,[10] and branches were popping up across New Zealand, due in part to the PRU’s close ties with the labour movement.[11] The genius of the PRU lay in its decision to restrict membership to only men who were directly affected by the Defence Act; this meant that when the government proceeded with its heavy-handed enforcement of CMT, the entire union could resist, forcing the issue into the public arena.

The Passive Resisters Union also began to publish and disseminate an anti-militarist journal called the Repeal. An irreverent and satirical journal, the Repeal was published from March 1913 to August 1914 and was distributed throughout the country.[12] The journal was a direct response to the persecution of the passive resisters: ‘no one with a trace of manhood, a feeling of sympathy, or professing a love of justice, ought to keep quiet while such a monstrous outrage is being perpetrated.’[13]

The public and the press were unhappy with the idea of the CMT defaulters being jailed alongside the ‘criminal class’.[14] When the Reform Government came to power in July 1912, the new Minister of Defence, James Allen, produced the Defence Amendment Act 1912. The Act broadened and defined the rights of objectors on religious grounds; it compelled employers to deduct any fines from an employee’s wages; and it required stubborn fine-dodgers to serve their time inside military barracks as opposed to regular jails.[15] 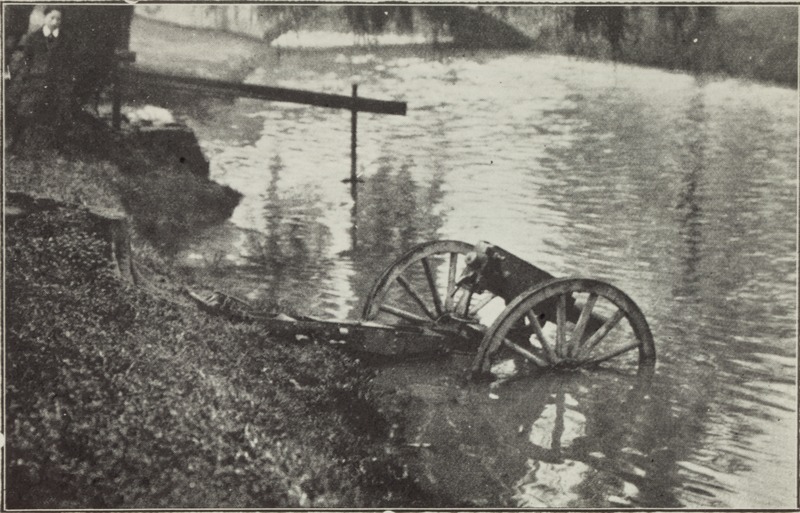 A South African War machine gun was rolled into the Avon in September 1912; the PRU denied any knowledge.

Unfortunately for the government, the recovering of unpaid fines through wage deduction would only serve to make the pacifist and labour movement opposition unify and strengthen.[16] This resolve was most clearly evident in what would become known as the ‘The Ripa Island Farce’.[17] The story is taken up in the Ripapa Island section of this website.

By early 1914, thousands of young men were refusing to take part in Compulsory Military Training, and the Passive Resisters Union was travelling around New Zealand stirring up as much opposition as it could muster.[18] The Repeal mocked the government’s continuing policy of convicting resisters: ‘Conscription is a success! Every month the parades at the Courts are improving.’[19]

In the end, the case for or against Compulsory Military Training would be decided by the outbreak of war in Europe. It would now be time for the pacifists and socialists to stand up not only against militarism, but also against jingoism and, above all, conscription.