George Wears Samms: A socialist and a pacifist 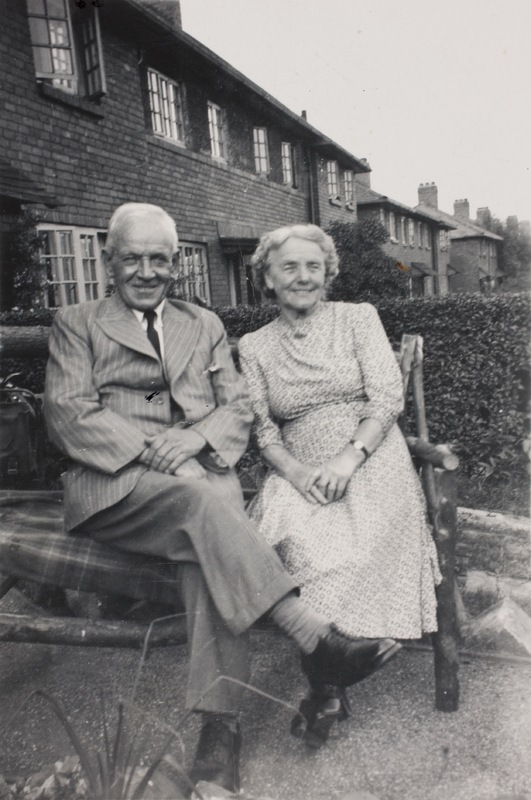 George and Lily Samms on their visit to England, 1951

George Wears Samms was born in Hunslet in south Leeds, on 23 November 1882. He attended the St Silas Anglican Church School until he was twelve years old, then left to become an apprentice iron moulder. In 1899 he ran away to the South African War by falsifying his age, later returning home to become the family breadwinner after his father was killed in a workplace accident. In 1907, George married Lily Bamford in the St Silas Parish Church, only a block away from where he had been born.

George had been making plans to immigrate to the USA, but Lily did not like the man that George planned to travel with and refused to accompany him. Lily told George that 'if you go, you go alone', but that 'Frank Robinson, who is a good man, is heading out to New Zealand. Lily (George and Lily Samms’ two-year-old daughter) and I will go to New Zealand with you, but not to the USA'.[2]

In 1911, George Samms and Frank Robinson sailed from England to New Zealand via the Cape of Good Hope, on a five-pound fare.

After three months on the steamship George and Frank arrived in Christchurch, but George was unable to find work and headed north to Wellington. He disliked Wellington intensely; feeling lonely and isolated, he later recalled being shown friendship on only one occasion. Frank came to the rescue, contacting him about a job that was going as an iron moulder at Scott's Iron Foundry in Christchurch. George returned to Christchurch and the two men established themselves before sending word to their families back in Yorkshire.

Their wives, Lily May Robinson (née Cole) and Lily Samms, along with baby Lily, boarded the SS Rotorua and departed Essex's Tilbury Docks on 9 May 1912. Experiencing a significantly more truncated trip than their husbands’, they arrived in Wellington six-and-a-half weeks later. George and Frank were waiting for them at the docks.

For four years both the Samms and Robinson families lived together on Clarendon Terrace in Woolston. The Robinson's daughter, Alma, was born there in May 1913. Over that time they saved enough money to buy two sections on Tilford Street in Woolston. They continued to live together on Clarendon Terrace until they had saved enough money to build on their Tilford Street sites. The Robinson's house was built first, in 1916, and both families lived in it until the Samms' house was finished. Lily and George's son, Keir Hardie Samms, was born two months later in November 1916. The Samms were the first people on Tilford Street to have electricity. 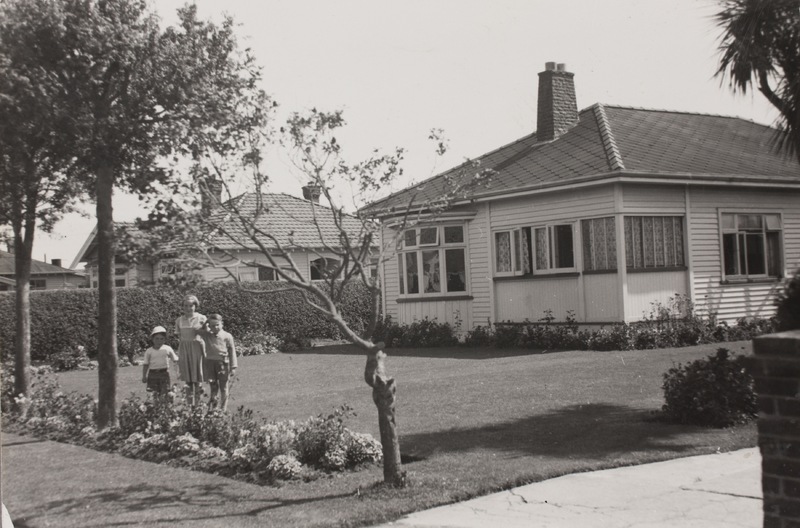 The Samms and Robinsons were now living on half-acre properties, and for two families who had come from Edwardian-era industrial Leeds the difference in the environments was significant. Each family had an orchard as well as a vegetable garden. In later years, Frank had large glasshouses from which he grew and sold tomatoes; causing some controversy on a street of socialists. George was a keen cricketer and had his own cricket pitch in the backyard. George loved his garden. He would get up at 5am every morning to work in his garden for an hour before having breakfast and cycling to work at the foundry.

Politically, George was a socialist. He believed in the power of the unions to change the fortunes of the working-class and he believed in a fair and equal society with a redistribution of wealth and an absence of poverty. Accordingly, he was heavily involved in the New Zealand labour movement. George was the secretary of the Woolston Branch of the Labour Party for 25 years, before being elected to the position of president of the Labour Representation Committee. 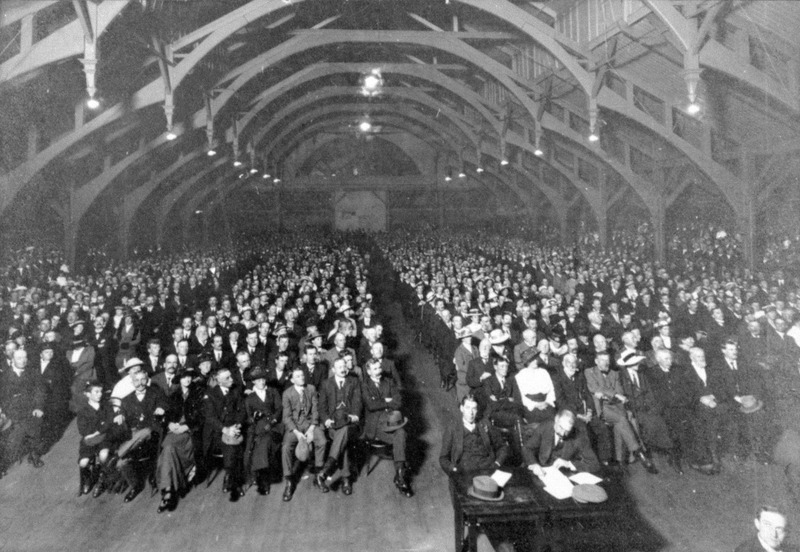 George's socialism also meant he was ideologically opposed to World War One. Like many other socialists he saw it as a capitalistic imperial war, with the working-class sacrificing their lives and the capitalists growing fat on war profits. The socialists asserted that if conscription was to be imposed upon people, then it should also be imposed upon wealth. They bemoaned the consequences of the war at home. The cost of living was skyrocketing, whilst workers' real-wages stagnated.

His conscientious objection to the First World War was also directly influenced by his experiences in the South African War; because of what he had seen and what he had to do in that conflict, George vowed never go to war again. George's pacifism and socialism were to coalesce when he was conscripted into the New Zealand Expeditionary Force (NZEF) on 25 April 1918.

Initially, George failed to respond to a written order to attend a medical examination for the NZEF. Following another letter, a meeting and an order to proceed immediately to the King Edward Barracks in town, he made it clear that he had no intention of submitting himself for medical examination. On 1 July George found himself before the magistrate. He reiterated that he would not submit himself for an army medical examination and agreed that all of the evidence given against him was correct. His one request was that he could make a statement, which the Star newspaper recounted in its reporting of his court-martial:

The document was to the effect that he stood for Socialism, and all that Socialism stood for as against militarism. As an answer to the question of why he refused to become a soldier he gave an incident of his life. At the time of the Boer War he was seventeen years of age, and was anxious to get away to crush the Boers. He ran away and enlisted. On his return home to his native town he saw nothing but misery and want. Wars were fought for the greed of one class and it was for this that all wars were fought. To try and kill men was not only criminal but insane. He swore that he would never shoulder a rifle again to shoot one of his own class. War cut into the every vitals of a race, but the list of the fallen did not tell half of the war's effects. Every country that tried to live by war must perish.[3] 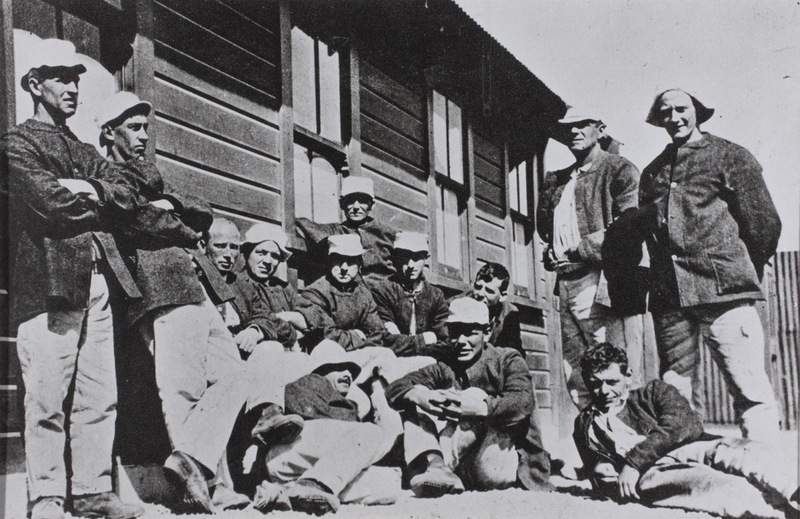 George Samms and other conscientious objectors in Paparua Prison

Using contributions received from all over the country, Ted Howard's Seditious Prisoners and Conscientious Objectors Fund was able to give Lily 88 pounds 13 shillings to help with expenses while George was in Paparua Prison. In 2015, that would be almost ten thousand dollars. During the time that George was incarcerated in Paparua Prison, Lily, Lily Jnr, Keir, and eventually Margaret in her pram, caught the tram to Moorhouse Avenue and then walked to visit him every Sunday. Speaking in 1984, George's daughter Lily recalled the teasing meted out by her classmates. Labelling her 'Coward' and 'Hun' they would ask where her father was, knowing that he was in prison. Even her teachers were not immune to making snide remarks, telling Lily that 'some people are too cowardly to go to war'.[5]

George's punishment became even more draconian upon release. He lost his rights as a citizen for ten years, meaning that he couldn't run for local or national public office, dashing local political aspirations. George had run for the Woolston Borough Council the year prior to being sentenced. Furthermore, as a man without the rights of a citizen George could not work for or be a member of a local or national government or public authority. He was also denied the right to vote; for a highly political socialist, this must have been the most frustrating of the many infractions inflicted upon his common and collective rights.

From 1917 onward, George was the secretary of the Woolston branch of the Labour Party. In 1938, after 21 years of service, he retired from the position and was honoured by the party. Jim Roberts, the president of the Labour Representation Committee, spoke warmly and admiringly of George, directly referencing the struggles during the First World War:

They knew what it felt like to be martyrs, but, in spite of persecution, the members of the branch stood by their ideals and the result was seen in the parliamentary elections. Much of the spade work had been done by Mr Samms. He and I secured our political education in the same movements in England, and we have been in gaol together in New Zealand. I make no apologies for that. [6]

Dan Sullivan, a Labour cabinet minister, said that George was ‘a man of ability and action, and had done the spade work, which had entailed considerable sacrifice’.[7] Tim Armstrong, another cabinet minister, called him ‘one of the few pioneers who had made possible the wonderful Labour movement in New Zealand’, and said that the present government owed its position to the loyalty and self-sacrifice of men such as George.[9] A year later, George was elected president of the North Canterbury Labour Representation Committee (NCLRC).[10]

The Second World War brought tension and created disunity within a Labour Party that, for the first time, had to address the issue of conscription from a majority-government position. Britain declared war on Germany on 1 September 1939, and the New Zealand Labour Party split. George's position had not changed since the First World War. Unable to reconcile himself with the Labour Party's attitude, George handed in his resignation as president of the NCLRC. The meeting tabled a motion that his resignation not be accepted, and it was carried unanimously. One delegate said that ‘Mr Samms is held in profound respect by the whole movement irrespective of their views’.[11]

A few months later, on 18 January 1940, around 800 people attended an Anti-Conscription Campaign meeting, held at the Latimer Hall in Christchurch. George was one of the keynote speakers:

I can assure you that I feel very proud to be on this platform tonight. I know there is an organised effort to prevent speakers saying what they think. I am going to say exactly what I think. I am anti-conscription and I am anti-war. In 1914 New Zealand entered the war, and then the war slogans began. The first one was that the war was to make the world safe for democracy. What a lie that was.[12]

George Wears Samms was a man of great courage and conviction. His brave stand against an imperial war, his indefatigable socialism and his defence of workers’ rights are an inspiration to anyone who believes in equality and fairness.

[2] Lily Samms, recorded by and in conversation with her daughter Patricia Smith, 1984.

[5] Lily Samms recalling her time at school while George was incarcerated, recorded by and in conversation with her daughter, Patricia Smith, 1984.