Ada Wells: First woman councillor outspoken in the peace cause 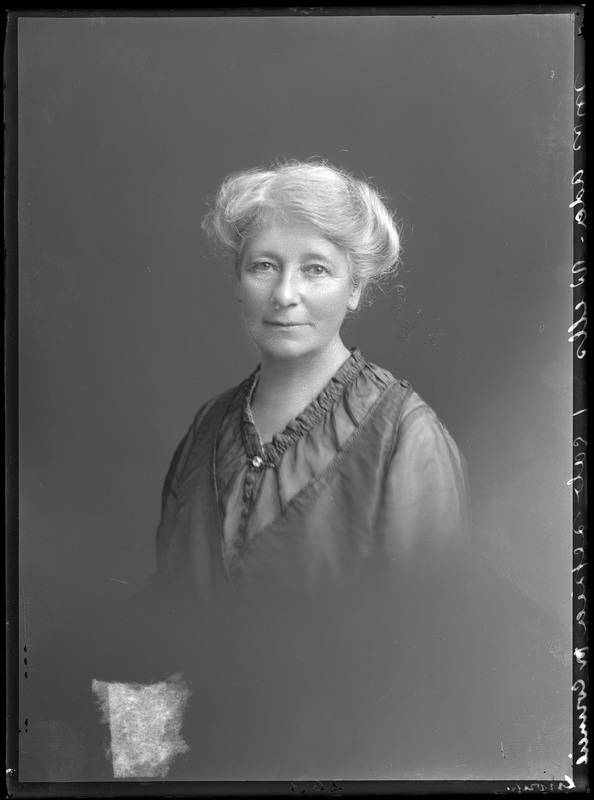 'She was out for the cause of peace. . . . She had been termed unpatriotic, and if to believe in the brotherhood of man was to be unpatriotic – well, then, she was unpatriotic.'[1]

Ada Wells made history when she was elected as a councillor of the Christchurch City Council in 1917, the first woman to achieve this.[2]

Her election was even more remarkable considering that during this period it was illegal to speak against New Zealand's involvement in the war, yet she was outspoken in her advocacy of peace and condemnation of militarism.  Her success at the poll probably came from the fact that she was a well-known figure in Christchurch who had been active for many years in numerous organisations, working especially for the benefit of women and children. She was also well-known for the stand she had taken against compulsory military training and conscription. Speaking at a public meeting in Linwood prior to the 1917 local body elections Ada Wells spoke out for peace and freedom. The Lyttleton Times reported:

She was out for the cause of peace . . . . She had been termed unpatriotic, and if to believe in the brotherhood of man was to be unpatriotic – well, then, she was unpatriotic. They were at the parting of the ways. Were they going to sell their glorious British freedom for Imperialism? Their forefathers had shed their blood for freedom of conscience and freedom of speech. Imperialism had taken away those gifts.[3]

Perhaps prompted by the death of her father when she was 19, leaving her mother a widow with nine children to support, Ada married the organist at the Anglican Cathedral, Henry (Harry) Wells in January 1884 (aged 21).  They had four children, three daughters and a son.[5] When she was dismissed from her teaching job at St Albans School in 1892 because she was pregnant, Wells began her life-long commitment to working for the good of women and children through community based organisations. She became Secretary of the Economics Department of the newly formed Canterbury Women’s Institute (CWI) in 1893[6] and Secretary of the National Council of Women at its first meeting in 1896. Papers she gave to National Council of Women meetings included 'Local Government Reform', 'The Evil Effects of Drug Administration' and 'Our duty to the Unfit', a detailed exposition of the employment, residential and educational services that she believed should be provided for those who were impoverished, unemployed or mentally or physically disabled.[7] Her mother was a well-known natural healer and Ada Wells also practised natural medicine.  From 1895 to 1899 Ada Wells wrote ‘Home’, a regular column on health for White Ribbon, the Women's Christian Temperance Union's magazine. 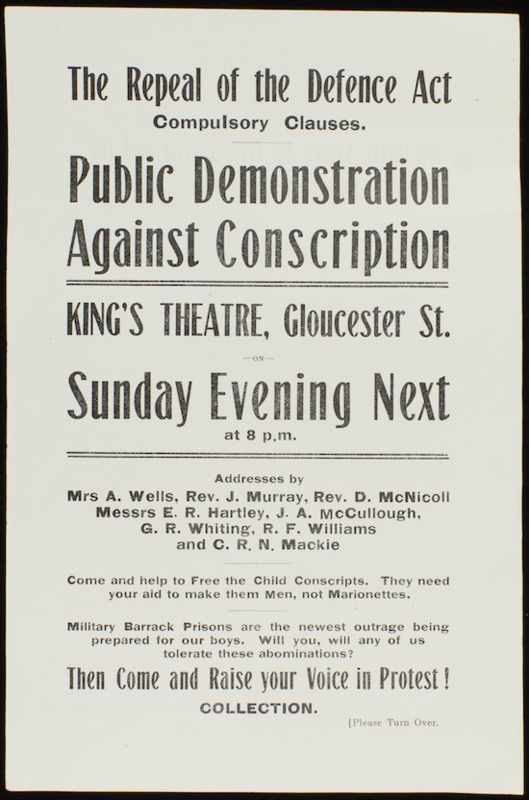 Flyer for a public anti-conscription meeting when Ada Wells and Charles Mackie were included in the line-up of speakers. National Peace Council pamphlet.

Ada Wells was the second woman to be elected to the Ashburton and North Canterbury United Charitable Aid Board and she was also active in the Children's Aid Society which she had helped to initiate in 1898.[8] Later she worked closely with her friend Sarah Page as they served as either President or Secretary of the CWI.[9]

Wells was recognised as an effective and popular speaker. As anti-militarist and labour movement leader Ted Howard reported, 'Mrs Wells can draw a crowd any time, because she is one of the clearest and most fascinating speakers we have in the Dominion. . . . In addition to her having a splendid knowledge of history and biology, she also has a grip of the history of secret diplomacy'.[10]

Ada Wells was uncompromising in her opposition to war. At a CWI organised anti-militarist meeting of women in Ashburton in October 1913, Ada Wells proclaimed: 'War is organised murder'. The Lyttleton Times reported that during the meeting Ada Wells ‘advocated the abandonment of armaments and the cultivation of internationalism [and] declared that the press had suppressed thousands of prosecutions that had taken place under the Defence Act’. The best boys were being driven from New Zealand because they would not serve. New Zealand was losing its best blood and the girls their sweethearts.[11]

In 1917 Ada Wells attended the conference of the newly formed Labour Party and spoke on behalf of labour women, as one of a deputation to the senior government minister, William Herries. She argued that it ‘was astounding that they had arrived at a time when men who stood up for freedom and the boasted right of their civilisation were put into prison cells’. Rather than bringing freedom, the ‘real fact was that Imperialism was costing the New Zealand people too much’.  Wells saw conscription as the ‘curse of Europe…planted in New Zealand’. ‘Imperial conscription’ was the aim of the ruling classes ‘and the whole country was to be dragooned into Imperialism’.[12]

In March 1919 Wells linked her opposition to war and conscription to the future not only of New Zealand but the world. As one of a labour deputation to the Minister of Internal Affairs, George Russell, Ada Wells spoke in support of conscientious objectors and to protest against the continuance of compulsory military training. She warned

two paths immediately in front of them, one leading to racial suicide and one to goodwill – the path of evolution…. the conscientious objectors … had proved that there was friendship in the world. But the authorities had dealt contemptibly with these men. The soul could not be conquered, and she urged the Minister to tell the national Government that they were people who would fight as long as they lived, and perhaps afterwards.[13]

Remarkably Wells and Page were never arrested for their anti-war speeches.

Wells commented that ‘[a]lmost all her friends had been in gaol, and she wondered how she had managed to keep out’ despite her being publically 'opposed to militarism root and branch '.[14] 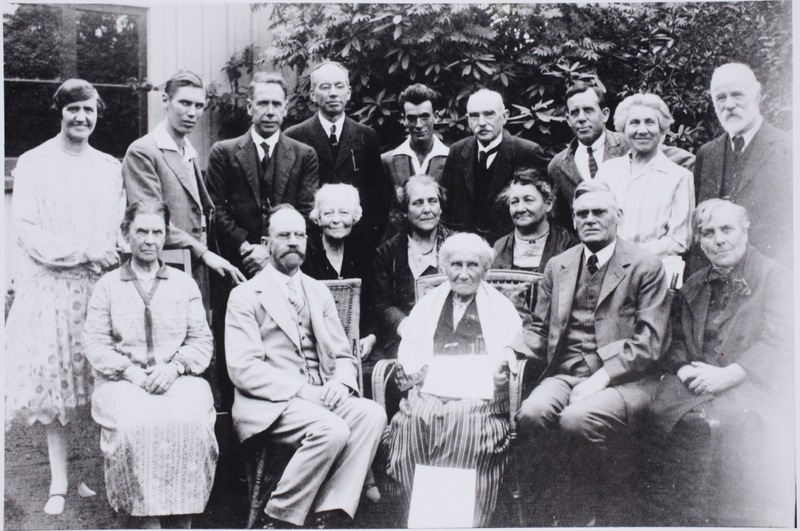 The 'No More War Committee' in 1929. Ada Wells is standing second from right. Her friend and colleague Sarah Page is seated in the centre of the middle row.

In the same year Ada Wells’ bid to be re-elected to the Christchurch City Council was unsuccessful. This time she campaigned alongside Sarah Page and the outspoken socialist Unitarian preacher James Chapple. Their platform was one of radical socialism including municipal ownership of housing and land, municipal baths, creches, kitchens, laundries and playgrounds. None of the three were elected.[15]

On her death in 1933 the Press newspaper said that New Zealand had lost 'one of the foremost of her public women’.[16]